Dr. George Rappard, Neurointerventional surgeon and endoscopic spine specialist at the Los Angeles Minimally Invasive Spine Institute, was honored by the George Washington University School of Medicine with induction into the school’s chapter of the National Medical Honor Society 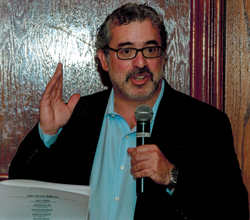 Los Angeles Minimally Invasive Spine Institute Neurointerventional Surgeon Dr. George Rappard was recently inducted into Washington DC’s Alpha Chapter of Alpha Omega Alpha Medical Honor Society. Alpha Omega Alpha is a professional medical organization that recognizes and advocates for excellence in scholarship and the highest ideals in the profession of medicine. Alpha Omega Alpha was founded in 1902 and is the only National Medical Honor Society in the world. Dr. Rappard was inducted at the 59th annual banquet and induction ceremony as a distinguished alumnus.

Rappard addressed the gathering of George Washington University Alpha Omega Alpha members and graduating class of 2014, resident and faculty inductees at the annual induction banquet held May 15, 2014 in Washington, D.C. Dr. Rappard noted how he had been inspired to become a Neurointerventional Surgeon by George Washington faculty and how his field has developed in ways unforeseen since he was a medical student at the university. While acknowledging the contributions of his class, the School of Medicine and Health Sciences Class of 1996, Rappard, one of four military veterans in the class of 1996, acknowledged the amazing service and sacrifice of Colonel Mark Taylor, MD. Taylor, an army veteran and class of 1996 graduate, served several combat tours in Iraq as a surgeon before being killed in 2004 while attempting to rescue American troops who were caught in an enemy barrage. Taylor left behind a son, Connor, now 16 years old.

George Rappard grew up in Southern California and graduated from La Canada High School, in La Canada, California in 1984. Rappard joined the Navy after high school and served aboard the USS Thach, a guided missile Frigate. After the Navy Rappard attended Pasadena City College and graduated from UCLA. Rappard graduated with distinction from The George Washington University in 1996. Rappard completed an internship in general surgery, residency in radiology and fellowships in neuroradiology, neurointerventional surgery and endoscopic spine surgery. Rappard started the first community based neurointerventional surgery practice in Los Angeles in 2004 and formed the Los Angeles Minimally Invasive Spine Institute in 2012. The Los Angeles Minimally Invasive Spine Institute has offices in the Miracle Mile area of Los Angeles and in Los Angeles County’s San Gabriel Valley.