Best Friends Animal Society (http://www.bestfriends.org) offers tips for keeping pets safe this 4th of July weekend. Fireworks are terrifying for many animals, and run-away pets wind up in shelters across the country, making this their busiest time of year. 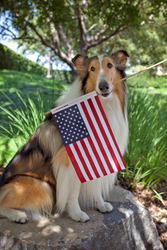 Best Friends four-legged Celebrity Ambassador Lassie encourages everyone to protect pets this Independence Day weekend by keeping them in a safe, comfortable place inside the house during fireworks.

If a dog cannot settle down, constantly pants, barks or seems to be trying to hide or escape, they may have a fear of fireworks.

While humans are uttering “oohs” and “ahhs,” enjoying the 4th of July fireworks, many terrified dogs are digging under or jumping over fences, breaking tethers or even shattering windows in an attempt to escape from the frightening noises. Cats who are allowed outside are also vulnerable to being scared away from their homes.

Frightened run-away pets wind up in shelters across the country, which fill beyond capacity in the days following the unofficial kickoff to summer, making it their busiest time of year. Some of these lost animals will eventually be reunited with their families, but others will sadly be injured or killed in traffic or remain unclaimed in shelters.

Although it’s unclear why fireworks are more terrifying for some pets than others, Best Friends Animal Society veterinarian Dr. Michael Dix points out that loud noise that seems to come out of nowhere can induce a fear response in many dogs.

“If a dog cannot settle down, constantly pants, barks or seems to be trying to hide or escape, they may have a fear of fireworks,” Dix said. “If you feel your animal has a severe phobia or a negative reaction to fireworks, you should contact your veterinarian about options including anti-anxiety medications.”

"Noise phobias in cats tend to be less noticeable,” Dix continued. “They can manifest as hiding in small areas, which is also behavior for a cat. Thus, owners are less aware of the stress the cat may feel.”

About Best Friends Animal Society®
Best Friends Animal Society is a national animal welfare organization focused on ending the killing of dogs and cats in America's shelters. An authority and leader in the no-kill movement, Best Friends runs the nation's largest no-kill sanctuary for companion animals, as well as lifesaving programs in partnership with rescue groups and shelters across the country. Since its founding in 1984, Best Friends has helped reduce the number of animals killed in shelters nationwide from 17 million per year to about 4 million. Best Friends has the knowledge, technical expertise and on-the-ground network to end the killing and Save Them All®.