1 In 8 American Donors Has Participated in a Giving Circle, New Jumpstart Report Finds 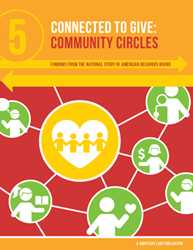 “Highly connected people become deeply committed givers, and it’s in giving circles that we see people creating philanthropic traditions that speak to their identity and community.”

One in eight American donors has participated in a giving circle—nearly half of them under the age of 40—and participation in a giving circle can both strengthen communal identity and expand philanthropic reach. These are some of the findings of the newly issued report Connected to Give: Community Circles, which combines quantitative and qualitative data to bring new insight to the philanthropic phenomenon of giving circles. The report, co-authored by Evelyn Dean-Olmsted, Sarah Bunin Benor, and Jim Gerstein, and published by Jumpstart, outlines the demographics of giving circle participation by age, gender, ethnicity, household income, family status, and more. Through interviews with participants in African American, Asian American/Pacific Islander, Hispanic/Latino, Jewish, LGBT, women’s, and Millennial-generation giving circles, this report examines how people explore and express their heritage and identity through collaborative giving.

“Giving circles teach us how, when philanthropic institutions don’t roll out the red carpet, people create their own ways in,” said Dr. Shawn Landres, CEO & Director of Research at Jumpstart, which has spearheaded Connected to Give. “Highly connected people become deeply committed givers, and it’s in giving circles that we see people creating philanthropic traditions that speak to their identity and community.”

With nationally representative quantitative research, Connected to Give: Community Circles documents just how widespread giving circle participation is in minority communities. The study uses data drawn from the National Study of American Jewish Giving and the National Study of American Religious Giving, painting a picture of strong participation in giving circles among Americans, and pronounced differences across race, ethnicity and gender. More than one in five African American donors (21%) have participated in giving circles, as have higher proportions of Asian/ Pacific Islander donors (16%), and Hispanic/Latino donors (15%). These are higher rates than among both Jewish donors (14%) and white non-Jewish donors (10%).

Connected to Give: Community Circles builds on previous research by incorporating both quantitative and qualitative research on Jewish giving circle participation.

“Giving circles translate group traditions into group action for the greater good,” said Sanford R. Cardin, President of the Charles and Lynn Schusterman Family Foundation, one of the project’s 17 funders. “As the report shows, participants across a range of giving circles—African American, Asian American, Jewish, LGBTQ, and more—are finding new and exciting ways to express particular values through giving that benefits both their own community and society as a whole.”

Jumpstart is a 501(c)(3) philanthropic research & design lab based in Los Angeles. Jumpstart’s unique combination of research, convenings, and funding enables creative changemakers—philanthropists and institutional leaders alike—to realize their own visions and advance the common good. Jumpstart’s innovative approach to analysis and forecasting, through such publications as The Innovation Ecosystem and The Jewish Innovation Economy, has earned international recognition. For further information, please visit http://jumpstartlabs.org or email connect(at)jumpstartlabs(dot)org. Follow @jmpstrt on Twitter or “Like” us on Facebook (http://facebook.com/jmpstrt).