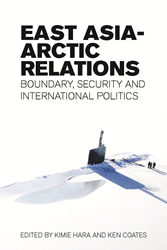 Recent world troubles, including climate change, the Fukushima Daiichi nuclear disaster and oil price volatility from the Arab Spring, are motivating East Asian states to become more deeply engaged in Arctic affairs, according to the editors of a new book released today by the Centre for International Governance Innovation.

The volume is the outcome of an international collaborative project, which aimed to launch a focused and detailed conversation about the historical, contemporary and future dimensions of East Asia countries’ relationships and interests in the Arctic. The focus of the initiative was to identify potential points of conflict and cooperation in this significant global governance issue.

Three countries — Japan, South Korea and China — are more attentive to, and interested in Arctic developments than ever before, say Hara and Coates. “The East Asian nations want to be part of the scientific research, regional planning and economic development activity in the Arctic. They clearly see in the North some of the crucial warning signs about global warming, offset by the possibility that the Arctic holds the raw materials needed to sustain industrial development in East Asia.”

“What is clear is that the Arctic now has a significant East Asia component. The shape, nature and intensity of East Asian engagement in the Arctic is much less clear,” say Hara and Coates. “Close monitoring, international collaboration and continues research will be essential if the shared, but far from similar, interests of East Asia and the Arctic are to be reconciled.”

"East Asia-Arctic Relations: Boundary, Security and International Politics" is available for purchase ($25 paperback; $12.50 eBook) at http://www.cigionline.org/asia-arctic. Review copies for those considering using the book as course material are available by contacting orders@cigionline.org.

Kimie Hara is professor and the Renison Research Professor at the University of Waterloo, where she is also director of East Asian Studies at Renison University College. She specializes in contemporary international relations of the Asia-Pacific region, border studies, Cold War history, and Japanese politics and diplomacy. She has held visiting fellowships/professorships at Kyoto University, the University of Tokyo, the International Institute for Asian Studies/University of Amsterdam, the East-West Center, Stockholm University and the Institute of Oriental Studies of the Russian Academy of Science.

The Centre for International Governance Innovation (CIGI) is an independent, non-partisan think tank on international governance. Led by experienced practitioners and distinguished academics, CIGI supports research, forms networks, advances policy debate and generates ideas for multilateral governance improvements. Conducting an active agenda of research, events and publications, CIGI’s interdisciplinary work includes collaboration with policy, business and academic communities around the world. CIGI was founded in 2001 by Jim Balsillie, then co-CEO of Research In Motion (BlackBerry), and collaborates with and gratefully acknowledges support from a number of strategic partners, in particular the Government of Canada and the Government of Ontario. For more information, please visit http://www.cigionline.org.