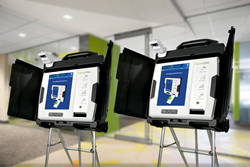 The certification of EVS5200 represents our world-class development team providing our customers state-of-the-art voting systems for the next generation of elections - Tom Burt, President

EVS5200 represents the company’s first certified election management system to feature the ExpressVote Universal Voting System, a key component in the company’s vision for the Future of Voting™.

The ExpressVote® system combines paper-based voting with touch screen technology to create a system that improves convenience for voters while making it easy and cost-effective for election administrators to deploy, according to Kathy Rogers, Senior Vice President of Government Relations.

“Today’s voters want voting systems that allow them to cast their ballots with total ease and efficiency without standing in line at the polling place,” Rogers said. “The ExpressVote provides election officials and voters with technology that can shorten wait times, increase voters’ confidence and bridge today’s voting requirements to tomorrow’s voting needs.”

The flexible ExpressVote can be used in early vote centers and on Election Day in precincts. The system is designed to handle the entire ballot-casting process for every eligible voter, including those with special needs.

Election officials no longer must guess the number of ballots to print. Instead, blank card stock is paired with an inexpensive activator that allows each voter to receive the correct ballot style. The blank card stock is inserted into the unit, a voter makes selections on an interactive touch screen and a human- and machine-readable paper record is produced that includes text and an optical scan barcode.

All votes are digitally scanned for tabulation on ES&S’ DS200® and DS850® devices, newly enhanced versions of which are also certified under the EVS5200 election management solution.

“The certification of EVS5200 represents our world-class development team providing our customers state-of-the-art voting systems for the next generation of elections,” said President and Chief Operating Officer Tom Burt.

ABOUT ES&S: Election Systems and Software, LLC (ES&S) is the world’s largest elections-only company, providing election equipment and services for nearly 35 years. ES&S serves 42 states and more than 2,400 of the 3,144 county-level governments across the United States. Learn more about ES&S at http://www.essvote.com and on Facebook at http://www.facebook.com/essvote.