California Criminal Attorney takes Defense by Storm in a Round of Recent Case Wins: The Rosenfeld Law Firm announces its Latest Success Stories

Years of hard work representing the accused prove fruitful. Sacramento criminal lawyer, Kenneth Rosenfeld, boasts significant wins in cases that were either dismissed altogether or had their sentences drastically reduced. 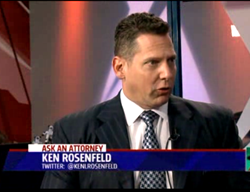 Every case is unique and requires a special set of investigation, research, and defense tactics.

Over the past few months, The Rosenfeld Law Firm has turned the lives around from what could have been years of punishment for the defendants, to much-needed help, greatly reduced sentences, or complete freedom.

For example, The Rosenfeld Law Firm recently represented a young man in California with mental health issues who, during a manic outburst, ran naked through an elementary school and resisted police officers. Charged with indecent exposure, he was potentially facing incarceration and the stigma that accompanies sex offender registration. California criminal defense attorney team, The Rosenfeld Law Firm, got involved and worked with the District Attorney. After bringing in experts and doing proper research, Ken’s firm presented its finding to the District Attorney who subsequently dismissed the case.

Another mental health case involved an older man who had a breakdown and began throwing large rocks from a freeway overpass. He then struggled with responding officers and was charged with multiple counts of resisting police. The Rosenfeld Law Firm relied on years of experience defending mental health patients and was able to get the case dismissed.

When it comes to California drug crimes, attorneys at The Rosenfeld Law Firm successfully defended a heroin addict who was caught with a considerable amount of the drug. Long hours and much investigation enabled Kenneth Rosenfeld and his team to deliver a winning argument that proved this young man had a sickness, which could not be cured in a prison cell. The case was dismissed and the defendant is receiving the help he so desperately needs.

Additional recent victories include a young man who was accused of shooting his friend in the chest during an altercation at a party, and was potentially facing life imprisonment. Although the friend lived and testified in front of the jury that he was shot in the chest at point blank range, the jury found in favor of the accused who walked away a free man.

Just recently, the Rosenfeld Law Firm represented a young man accused of first degree murder and shooting at an inhabited dwelling. Barely 18 years old, he was part of a group of teens who went to a house to confront another group of teenagers. A shot was fired into the house where it struck and killed the teenaged victim. The jury acquitted the client of all homicide charges as well as of shooting into the house. Once facing life in prison, this young man can now look forward to his future as a free man.

Known for California celebrity defense, attorney Ken Rosenfeld recently represented a high-profile individual in a criminal matter. The person was accused of driving a motor vehicle with 16 times the legal alcohol limit. Mr. Rosenfeld was able to show the significant flaws in the testing and circumstances; while the case was not dismissed, major advances were made and hurdles overcome.

The firm’s new law office is located in Sacramento; however, Attorney Ken Rosenfeld handles cases all over California including the Bay Area, Silicon Valley, Northern California and beyond, including but not limited to: