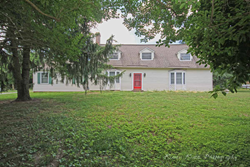 Friends would say that he’d be downstairs working on things, inventing things, for hours. The basement was his chemistry lab. It was where he put his literary mind and scientific mind to work together.

In 1946, Will Jenkins imagined computers. In his famed literary work, he called them logics. And in his mind – one that told the story of the future – people had them in all their homes.

Now Jenkins’ own home, where he penned this and other science fiction short stories including “First Contact” that first references a universal translator made famous by Star Trek, is for sale.

This is not just any home. Ironically, given the genre Jenkins earned his fame in as a writer, the home, renovated from a chicken coop, is among the most highly historic properties in the Tidewater and Central region of Virginia.

In the rooms throughout the house, Jenkins, who’s most known under the published name Murray Leinster, penned many of his more than 1,500 short stories, articles, movie scripts and television plays. In the home’s basement, he invented front projection, forever changing the way films are presented.

“Friends would say that he’d be downstairs working on things, inventing things, for hours,” said Beth Richardson, Jenkins’ granddaughter. “The basement was his chemistry lab. It was where he put his literary mind and scientific mind to work together.”

Circa. 1700, the 2,280-square-foot home is loaded with charm and grace, featuring original plank wood flooring, fireplaces and mantels. A family room just off the quaint kitchen, complete with brick floors, faces the York River and the property’s sandy beach, pier and boatlift, located a short walk across an estate, meadow lawn.

“Our family, friends and those who visited my grandfather fished these waters and made this a playground,” Richardson said. “Years ago, even though there were hotels in town on Main Street, people were known to come visit and stay at the house. In the years since he died, we’ve enjoyed everything the property offers, from boating to relaxing in the gardens beneath shade trees.”

Archaeological digs on the property unearthed centuries old foundations, pipe stems dating back to 1670 and glassware.

Ivor Noel Hume, the British archaeologist known as the father of historical archaeology and former director of Colonial Williamsburg’s archaeological research program, authored “Excavations at Clay Bank” and detailed items found on the property that now are on display with the Smithsonian.

“He entertained many of the greats right here and Gloucester,” Richardson said. “It’s amazing to think how much history is located right on that parcel of land, from colonial to alternate worlds.”

Jenkins himself was born in Norfolk, Va. on June 16, 1896. During World War I, Jenkins serves in the U.S. Army and with the Committee of Public Information. His freelance writing career kicked off after the war, with his first short story getting published before his 20th birthday.

In 1921, he married Mary Mandola, soon moved to Clay Bank and together they had four daughters.

“They also had a home in New York,” Richardson said. “But this place, it has character. Charm. I imagine he drew a lot of inspiration here.”

His science fiction short story “Sidewise in Time,” first published in 1934, became the namesake for the Sidewise Award for Alternate History, established in 1995, to recognize the best alternate history stories and novels of the year.

Alternate history stories are set in worlds where historical events unfold differently than it did in the real world. This genre of fiction is considered a sub genre of science and literary fiction.

In 1963, Jenkins was named the Guest of Honor at the 21st Worldcon in Washington, D.C. The World Science Fiction Convention was first held in 1939 and will meet this year in London.

While best known for his science fiction and alternate history work, Jenkins wrote stories specific to literary magazines publishing during the 1920s, ranging from westerns to mysteries and detective stories to horrors.

Throughout his career, Jenkins’ work appeared in national magazines such as Collier’s Weekly, the Saturday Evening Post and Esquire.