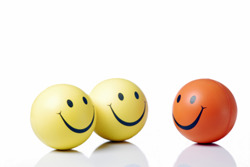 Moderate optimists hope for the best, but are also realistic about their chances for failure or disappointment.

You don’t have to be a Pollyanna to be happy.

Extreme optimists are either scorned for their bliss or mocked for their naiveté. New research from PsychTests, however, indicates that people do not need to be a total optimist in order to be happy.

Using data collected from their Happiness/Optimism Test, their statistics reveal a rather surprising revelation: Those who are happiest, most satisfied with their relationships, most resilient in the face of hardship and stress, and who feel the healthiest didn’t score in the highest range on optimism.

Researchers at PsychTests took a sample of 16,342 people who took their test and asked them questions about, among other things, their level of satisfaction with different aspects of their life, their ability to deal with stress, and their willingness to trust people.

When faced with a crisis

Ability to deal with stress

“What we discovered in our analysis is that you don’t have to be a Pollyanna to be happy, which is very much in line with Dr. Martin E. Seligman’s concept of ‘flexible optimism’,” explains Dr. Jerabek, president of PsychTests.

“The people in our sample who are happy, satisfied, and resilient are not in denial; they don’t ignore potential consequences or risks - but they also don’t dwell on them. They expect the best outcome, but prepare themselves just in case things don’t turn out as well as they expected them to. In risky situations or situations with a possibility of failure, they plan and prepare accordingly rather than simply assuming that everything will turn out fine. They don’t expect the world to always be ‘sunshine and lollipops’; they just enjoy those great moments when they happen, and prepare themselves, mentally and practically, for those days when it could get cloudy.”

“Extreme optimists, on the other hand, may underestimate the need to plan ahead and be resourceful. This places them at risk of being blind-sided by the unexpected, which can be a very rude awakening. Pessimists anticipate the worst, which may temper disappointment, yet when something good happens to them, they have difficulty enjoying it because they tell themselves that any form of happiness is fleeting. Clearly, the ideal mindset is in the middle.”

Want to assess your level of optimism? Go to http://testyourself.psychtests.com/testid/2114.

Professional users of this assessment (therapists, life coaches and counselors) can request a free demo of this or any other tests from ARCH Profile’s extensive battery: http://hrtests.archprofile.com/testdrive_gen_1.

Moderate optimism, mixed with a dose of realism, seems to be the right recipe for life satisfaction.Those who are content with their life and able to cope with hardship are actually moderate rather than extreme optimists.