A groundbreaking dystopian satire from Bitingduck Press, Michael P. Michaud's "Billy Tabbs (& The Glorious Darrow)", is now available to book reviewers and bloggers in advance of its November 3, 2014 publication date. 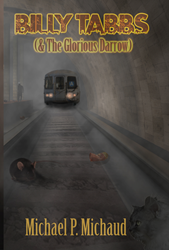 One of 'those' books that everyone needs to read

A youthful vagrant Billy Tabbs has been living in the streets for as long as he can remember, scratching out a pitiable existence in a city that doesn’t much care if he lives or dies. Amidst rumors that his kind are disappearing from the alleyways and the overpasses, Billy is recruited into a bizarre homeless sect living in the underbelly of high society. It is here where he meets Darrow — the mysterious and volatile leader of an organization committed to escalating acts of civil disobedience, an organization meant to force the people of the city toward equal respect for all inhabitants of society.

Following a brazen public initiation, Billy is accepted into the group, soon becoming a valued member. However, as their movement gains popularity and their own numbers continue to swell, can they avoid becoming that which they’d originally set out to fight? Compounding this disturbing trend is the growing divide among their leadership, with their ideology ever teetering between violent and non-violent activism.

Pre-release reviews show that there aren't any books quite like "Billy Tabbs." A Book Lover’s Corner calls it “A Wonderful Book", and Library Grits says, "I think it will become one of 'those' books that everyone needs to read.” Actor/social activist Mariana Tosca writes that Billy Tabbs is “an engaging and crisply compelling parable for the 21st century,” while Joanna Harkin, Founder/Director: Alliance for Stray Animals and People, adds that "Tabbs" is “Riveting. Thought-provoking. I loved-loved-loved this book!”

The book is appropriate for ages 12 to adult. Electronic review copies are available to reviewers on NetGalley and print or electronic copies directly from the publisher. Readers can also visit Goodreads – where the novel holds a four-star rating – to enter for a chance to win an advance signed copy.

Want to meet the author? Michael will tour the following cities this November: Oakville, ON. Burlington, ON. Toronto, ON. London, ON. Montreal, QC. Alexandria, VA. Vancouver, BC. Victoria, BC. Whistler, BC. Seattle, WA. Portland, OR. Follow him on Facebook for the latest contests and event details.

Bitingduck Press is an independent press based in Los Angeles and Montreal. Founded by two scientists, it specializes in fiction and narrative non-fiction by and about scientists. The press has two major themes for 2014-15: Young Adult and Hard Sci-Fi, with a particular interest in themes of environmentalism and animal rights. Submissions are still open for the Hard Sci-Fi category; both novels and short story collections are welcome. Submissions guidelines are found on the press's website.