Current Indiegogo-funded film,"The Anatomy of a Great Deception" by Moving Flicks to be featured at 9/11 Truth Film Festival. The event is titled "Exposing The Greatest Fraud on Earth!" 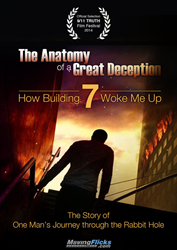 The Anatomy of a Great Deception

Our film being chosen to headline this year's 9/11 Truth Film Festival is a great opportunity that we plan to take full advantage of.

The fast-paced docu-thriller, which has been gaining recognition from its current crowdfunding campaign on Indiegogo, will appear in the coveted evening slot at the festival.

Its filmmaker, David Hooper, hopes that news of this additional exposure in the 9/11 Truth community will help his film reach its $50,000 goal on Indiegogo before the campaign ends on July 27. The fundraising has hit 70% of its goal, with just 10 days remaining.

Hooper, who plans to use the Indiegogo proceeds to broaden the distribution of the film to a wider audience, is encouraged by the global support received including the donations from the UK, Canada, several European countries and Australia. "Our film being chosen to headline the 9/11 Truth Film Festival is a great opportunity that we plan to take full advantage of," Hooper notes.

Anyone who would like to support the film—and receive one of the many perks being offered—is welcome to click on the campaign's page: https://www.indiegogo.com/projects/the-anatomy-of-a-great-deception

The 99-minute film chronicles the disturbing discoveries Hooper made when he did his own investigation into several controversies swirling around the 9/11 official story. What sets his documentary apart is how freely Hooper discusses the emotional upheaval he experienced when sorting out the truth of 9/11 from the many lies told about the event. The trailer can be seen at https://www.youtube.com/watch?v=zaZfgYUCiVw&feature=player_embedded.

Moving Flicks, a Detroit-based independent film studio and distribution house, was formed to promote the film leading up to its September release date. The release is timed to coincide with the expected national media coverage of the 13th anniversary of 9/11.

The film will be released through conventional sales channels, including digital platforms.

Hooper has chosen Detroit to host the film's launch party. He hopes the city will serve as a rendezvous point for the 9/11 truth community, including such organizations as Architects & Engineers for 9/11 Truth, a non-profit, non-partisan organization comprised of architects, engineers, and affiliates who are dedicated to revealing the facts about the complete destruction of all three World Trade Center high-rises.

Hooper's team will give a portion of the proceeds from the film's DVD sales to the 9/11 Truth community. "In addition to AE 911 Truth, we've pledged to donate to the Families of Freedom Scholarship Fund, which provides educational assistance to family members of victims of 9/11," according to Samantha Moreno, head of media relations for Moving Flicks.

One dollar from each DVD sold will be split between those two organizations.

"The money sought for distribution of The Anatomy of a Great Deception helps to keep the memory of 9/11 alive by giving the truth some help," observes Hooper.

Donation levels start for as low as $2.00 so that anyone who has the desire to show their support is able to do so.

If you'd like to learn more about how to be part of this truth movement and help get the film's message in front of a wider audience, visit: https://www.indiegogo.com/projects/the-anatomy-of-a-great-deception.

About Moving Flicks, LLC
Moving Flicks, LLC is a privately held company with offices in Detroit and Chicago. Filmmaker, David Hooper spent three years making the film before forming the company in May of 2014. Moving Flicks will continue to produce and distribute films that move audiences.

The Anatomy of a Great DeceptionPoster

Make it happen on Indiegogo