Opera singer Adelmo Guidarelli has released a new 2015 calendar where he poses nude in opera settings to prove that it still ain’t over till the fat lady sings. 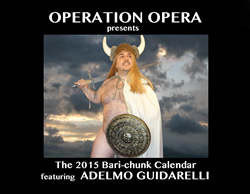 My Bari-chunk calendar is an offering of something that is very realistic... I hope it will get us back to focusing on what is really important in opera – the voice, and stop all this hate directed towards the singer.

Opera singer Adelmo Guidarelli has released a new 2015 calendar where he poses nude in opera settings to prove that it still ain’t over till the fat lady sings.

The recent “Fat-Shaming” controversy in the world of opera once again points out the issue of sexism and gender inequality in the classical world. Although mostly directed towards women, there are websites which are directed towards men. Barihunk is a website where you are invited to meet “The Sexiest Baritone Hunks from Opera,” so Mr. Guidarelli thought it best to level the playing field with his new 2015 Bari-chunk Calendar. “It’s bad enough that advertisers damage more and more young people everyday with unrealistic images of teens which causes them to be unhappy with their bodies and lack self-confidence, but does it also have to cross over into the world of classical music?” asks Guidarelli. “My Bari-chunk calendar is an offering of something that is very realistic.”

Mr. Guidarelli has toured extensively in Europe, working with operatic legends, including Luciano Pavarotti, and has performed before Pope John Paul II as well as Queen Elizabeth. His voice has been heard on national commercials and his solo album, “Treasured Songs of Italy and Germany,” spawned a #1 hit for his dual language recording of “Funiculì, Funiculà."

If you would like to see Adelmo Guidarelli in person, he is currently performing the MAC Award-winning super hit of the Edinburgh Festival, Operation Opera, for a limited two-week engagement at Feinstein’s at the Nikko San Francisco, 222 Mason St., San Francisco, CA 94102– July 31 through August 10, 2014.

The performance schedule for Operation Opera is as follows: Thursdays and Fridays at 8 p.m.; Saturdays and Sundays at 7 p.m. Tickets range in price from $35 – $50 and are available now by calling 866.663.1063 or visiting http://www.ticketweb.com.