Researchers with the Atlantic Salmon Federation are part of an exciting new tracking program of alewives on the International St. Croix River. 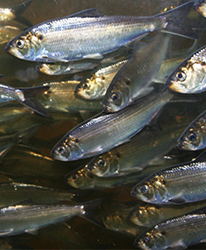 Alewives are a native migratory species. During their migration, they are often the primary target of predators, protecting out-migrating smolts.

We hope the study will give early information on how alewives may be returning to their historic spawning grounds.

The Atlantic Salmon Federation (ASF) is tracking fish from the sea to inland spawning sites in the St. Croix River this summer, in the first phase of a new international restoration project. The findings will help to document the first return of sea-run alewife and closely-related blueback herring to the upper St. Croix watershed after removal in 2013 of the Grand Falls barrier. The Grand Falls barrier was among the blockages imposed by the State of Maine in 1995.

In June, 30 alewives entering the St. Croix River were captured at the Milltown head of tide fishway, implanted with acoustic tags and released to continue upstream. The tags send out ‘pings’ every 20-40 seconds that will be recorded by underwater receivers located up to 80 miles inland in the river and its flowages. For three months, the receivers will track the route of these fish into the watershed to spawn and follow them on their return to saltwater.

That’s if they are lucky.

“We hope the study will give early information on how alewives may be returning to their historic spawning grounds, but tracking just 30 fish in a watershed of this size, with its many predators and obstacles, leaves a lot to chance,” says Jonathan Carr, ASF’s Executive Director of Research and Environment.

The 30 tagged fish were among the 27,312 alewives and blueback herring that returned to the St. Croix in 2014. Historically, the St. Croix River, located on the Maine-New Brunswick border, supported one of the region’s largest alewife runs. The runs declined in the 1900s due to dam barriers and pollution. When these were largely addressed, they began to recover in the 1980s, reaching 2.6 million fish in 1987.

In 1995, the Maine Legislature reacted to demands from smallmouth bass interests who insisted that alewives would decimate their sport-fishing economy, and closed state-controlled fishways to 98% of the alewive’s spawning habitat. In response, alewife numbers plummeted to a low of just 900 fish in 2002.

After further study, the State Legislature lifted the last of its barriers in 2013 to allow alewives to again begin their recovery. Earlier scientific studies suggested that the St. Croix might be capable of producing 31 million of these fish annually, with significant benefits to many freshwater and marine food chains and a commercial fishery. Alewives act as a buffer to predation of smolt moving out to sea. While current population estimates are lower; the widespread benefits of alewife restoration have now been well-documented.

When compiled this fall, the tracking study results will provide information on what parts of the St. Croix watershed the alewives are using now, so that future research can be targeted appropriately.

The tracking study is being funded, in part, by the Maine Outdoor Heritage Fund which conserves state wildlife and open spaces through the sale of lottery tickets. The Fund awards approximately $700,000 in grants annually; see http://www.maine.gov/ifw/MOHF.html for more information.