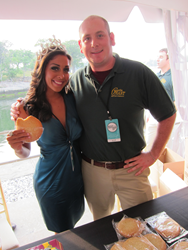 The Best of Westchester Party is a great venue for Gentle Giant movers to converse with members of the community, as well as share exciting stories about our unique experiences moving folks throughout Westchester

Award winning New York moving and storage company Gentle Giant, which specializes in local and long distance moving, today announced its involvement with Westchester Magazine’s annual Best of Westchester Party, which will take place on July 23rd at the Glen Island Harbour Club. This is the fourth time Gentle Giant will exhibit at this popular party and networking event.

Gentle Giant will have a significant presence at the event and plans to give away a number of prizes, such as an Amazon Kindle eReader and two $250 Gift Certificates for Gentle Giant moving services. Also making a repeat appearance due to popular demand is the “Giant Feet” display that partygoers can use as a fun backdrop for photographs.

“The Best of Westchester Party is a great venue for Gentle Giant employees to converse with members of the community, as well as share exciting stories about our unique experiences moving folks throughout Westchester,” explained Gentle Giant New York Branch Manager Josh Charry. “This event is an excellent way to show our neighbors that we are an award winning New York moving company who are eager to be of service and earn the opportunity to be recognized as the Best of Westchester in the future.”

Being involved in high profile networking events like the Best of Westchester Party, and then backing up their great reputation while conducting moves, has increased Gentle Giant’s brand recognition throughout New York so much that the 13-time Angie's List "Super Service" award winning moving company opening a second New York branch in the Brooklyn last year.