Paybits is a new approach to acquiring Bitcoin. You no longer need exchanges to convert your paycheck into Bitcoin. 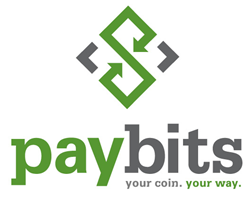 Paybits announces the launch of the first payroll service that allows employees to convert a portion of their net pay directly to bitcoin, an emerging digital currency, each pay period. A beta trial will be launched in the U.S. in August 2014 followed by a public launch in October.

With more and more businesses from Expedia to 1-800-FLOWERS accepting bitcoin, and the recent move of the governor of California, the eighth largest economy in the world, to legalize the currency, bitcoin’s popularity and presence continues to rise. Paybits’ vision is to help companies meet the demands of their employees by offering their workforce the option to receive payment in the form of bitcoin.

Scott Nichols, founder of Paybits, created the business in order to help people feel more comfortable using this innovative digital currency. Nichols says, “Bitcoin shouldn't require membership in the technocracy to acquire it. Bitcoin should be as easy to get as your paycheck.” Nichols believes having a constant income stream in bitcoin will make people more apt to spend them. “Paybits is an automated service, so the customer doesn't have to think about the right time to buy bitcoin. Enabling individuals to be paid in bitcoin is another step in extending the bitcoin ecosystem into our economy,” Nichols says.

In addition to easy acquisition of bitcoin, Paybits eliminates counter party risk since bitcoin is stored in the customer’s own wallet. The service has no transaction fees and is priced at a flat rate of $5.00 a month.

Following the beta trial, the company plans to rollout Paybits globally starting October 2014. Employees interested in a service trial may sign up on the Paybits website http://www.paybits.net.

Paybits has a passion for innovation and change. The status quo is never good enough. The Paybits vision is to make getting bitcoin as easy as getting a paycheck. Paybits is committed to providing “Your Coin, Your Way.”