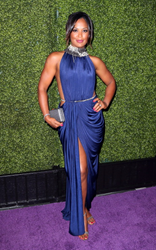 Ms. Ali, the daughter of retired heavyweight boxing legend Muhammad Ali, retired from boxing in 2007 and is now active in television, including co-host appearances on the E! network’s “Fashion Police.”

Proceeds from the DesignCare event benefit the HollyRod Foundation. The foundation, formed in 1997 by actress Holly Robinson Peete and her husband former NFL quarterback Rodney Peete, is dedicated to providing care to those living with autism and Parkinson’s disease.

The Art Deco Clutch is a stylish box-shaped metal clutch reminiscent of an early 20th Century cigarette case. It is entirely handmade by an Italian jeweler, and the logo at the top of the clutch functions as the bag’s closure.

Jill Milan handbags are entirely made in Italy, by Italian artisans using Italian materials and features hand stitching. All Jill Milan products are free of animal-based materials such as leather, fur and wool – Ms. Fraser was inspired to found Jill Milan because she was unable to find high-quality, luxury handbags that were not made of leather or other animal-based materials. She is a supporter of animal welfare initiatives, and as a former equestrian particularly supports charities that benefit horses. In 2013 Jill Milan was named Vegan Business of the Year by the organization Vegans are Cool.

Jill Milan handbags have drawn growing attention from influential fashion media. W Magazine has covered Jill Milan in multiple issues, including featuring the Octagon Clutch in a recent issue. Entertainment, fashion, and lifestyle news magazine Entertainista named the SoHo Carryall a “Must Have” handbag. The Zoe Report recognized the Newbury Street Portfolio for its ability “to go from the office to cocktail hour.” Wedding media publisher The Knot featured the Art Deco Clutch as part of a striking wedding ensemble. And influential fashion blog Wendy’s Lookbook featured photos of fashion writer Wendy Nguyen carrying the Art Deco Clutch on her trip to Florence, Italy.