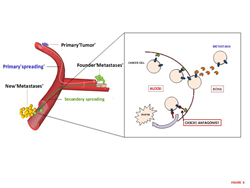 An estimated 68,000 women and men in the U.S. die each year from metastatic breast and prostate cancers – an aggressive form of the disease that occurs when the cancer has spread to other parts of the body, such as the lungs, liver, bones, or brain. Now researchers at Drexel University College of Medicine have developed a compound directed at a target they identified that inhibits metastatic progression by blocking tumor cells from “re-seeding.” Their discovery has been accepted into a highly competitive drug development program at the National Cancer Institute and will now be headed to clinical trials.

The chemokine target was initially discovered and validated in 2004 by cancer biologist Alessandro Fatatis, MD, PhD, professor in the Departments of Pharmacology & Physiology and Pathology & Laboratory Medicine at Drexel. But it would be several years before he began working with medicinal chemist Joseph Salvino, PhD, also a pharmacology professor at Drexel, and the two discovered that Salvino could develop a compound aimed at Fatatis’ target to produce a new therapy to treat cancer patients.

The compound works by targeting circulating tumor cells which leak into the blood producing new lesions, most commonly in the skeleton, therefore precipitating the progression of the disease. “Cancer cells in the blood survive only a few hours,” explains Fatatis. “They need to rapidly find a new home. What this compound does is block tumor cells from seeding again and again and pushes them toward a natural death in the blood.”

The compound specifically targets the chemokine receptor CX3CR1, which is expressed on circulating tumor cells and implicated in metastasis to the bone.

“A significant additional benefit is that the new compounds are not toxic,” adds Salvino. “We’re not talking about chemotherapy. We aim to develop a medication that someone could safely take in combination with their normal standard of care.”

The National Cancer Institute reviewed the discovery and deemed it scientifically meritorious to accept into its highly competitive Experimental Therapeutics Program (NExT), which gives the scientists access to the Institute’s drug discovery, preclinical and clinical development resources up to stage 2 clinical trials. The funding for this project is not yet finalized, but similar programs funded through NExT had budgets of approximately five million dollars.

The trials, which should begin in the next three to five years, will focus on advanced breast cancer patients with evidence of metastatic disease. But both scientists believe their discovery could have implications for other types of cancer as well, particularly prostate cancer.

“This really is a translational scientist’s dream come true,” said Fatatis, who as a medical doctor in addition to a PhD stressed the personal significance of working on something that could be brought from the bench to the clinic with the potential to make a real difference for patients.

Salvino adds, “This is the true definition of scientific collaboration. It’s not one isolated scientist in a lab. This is the result of scientists with different areas of expertise getting together and figuring out how to really make an impact.”