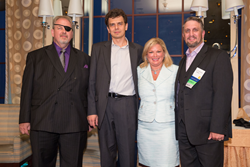 The 2014 winning executive and project epitomize the innovation and values for which the ISE® West Awards are known...

Max Solonski, director of information security for the BlackLine Systems, was selected as the Information Security Executive® of the Year Award winner for the ISE® West Region. As the software leader’s first security-focused executive, Solonski built his team from the ground up, consistently balancing security and business needs while also remaining approachable and responsive at all times. He believes that InfoSec is an integral part of the overall business function and a responsibility of each of those involved. In just two years, he has expanded the company’s controls register by 40% to cover SOC2 requirements and international regulations, and his team effectively maintains a secure and available environment for a large commercial website that processes financial information and serves millions of web pages each day.

“The 2014 winning executive and project epitomize the innovation and values for which the ISE® West Awards are known. Each has made a significant, positive impact for their organization’s security posture, tackling complex challenges in a swift and effective manner,” said T.E.N. CEO and President Marci McCarthy. "We are honored to have each and every one of our nominees join the ranks of our distinguished ISE® Alumni.”