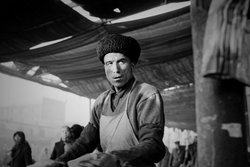 My only hope is that my work does justice to the wonderful people and the visual places that I’ve had the chance to learn so much from over the last ten years.

“Chinese Turkestan” looks at life in China’s remote Muslim, northwestern region of Xinjiang. Ryan Pyle spent nearly a decade exploring the 1.6 million square kilometer region, studying its history and capturing its unique beauty with his camera. The book will be available for purchase on September 5, 2014 from Amazon.com

"It’s a humbling experience, as an artist, to release a body of work that you’ve slaved over for more than a decade. My only hope is that my work does justice to the wonderful people and the visual places that I’ve had to the chance to learn so much from over the last ten years,” said Ryan Pyle.

Pyle travelled around China’s Xinjiang Uyghur Autonomous Region between 2004 and 2012, taking photos with his Leica M6 on Kodak TriX Film, using both a 28 mm and a 50 mm lens.

The Xinjiang region itself is sparsely populated and covers a wide range of climates – from deserts to river basins, mountains and grasslands. Many of the events that have occurred there during the last 2500 years have been inextricably associated with its geographical position in northwest China, at a crossroads linking Europe and Asia. Traversed by branches of the series of trade routes that formed the ancient Silk Road, the region has been fought over and controlled by a succession of warlords and empires.

Pyle is both the photographer and author of the opening essay. Design work was done by Giorgio Baravalle of De.Mo Design, and the book was published by Ryan Pyle Productions. It will be available September 5, 2014 on Amazon.

About the Author:
Ryan Pyle is an award-winning photographer and has been featured in the New York Times, TIME, Newsweek, Fortune and more. Recently, he has been working on travel shows that take place in some of the most remote areas of the world. He is available for interviews, exhibitions, lectures and teaching opportunities. His photography can be viewed at http://archive.ryanpyle.com/.

An image from Chinese Turkestan