The EasyBulb Plus allows users to interact with their lighting, saving time and money. Its creator, Gigateq Limited, is seeking funding to begin production. 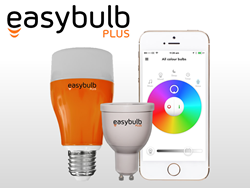 EasyBulb Plus is the perfect device for small businesses owners, like DJs, photographers, and restaurant and store owners.

One of the easiest ways to enhance décor and boost mood is to change interior lighting. Now EasyBulb Plus puts the power of lights in its users’ hands via their mobile devices, enabling them to control their lights from anywhere in the world. EasyBulb Plus creator Gigateq Limited has launched a crowdfunding campaign to raise $1,000 by September 10 to begin production of its latest invention.

Having already devised in 2012 a light bulb that is controlled by a mobile device, Gigateq Limited’s new EasyBulb Plus has built upon the earlier design offering more features and an enhanced app to control lights that is available across all platforms, including iOS, Android OS, and open API with Windows OS coming soon.

EasyBulb Plus can be controlled in just about any way imaginable, from changing to any color of the rainbow to night sleep mode with gradual dimming. “The color wheel on the app lets you easily match your lighting to your mood,” said Gigateq’s Henry Ofodieze. “Or, instead of using the color wheel, you can simply speak to your device to tell the app what color you want.”

Other features of EasyBulb Plus include the proximity setting, signaling for lights to turn on upon arrival at home and turn off upon departure. It can also be synced with any music source, including iTunes, to integrate music and lights together and can even give phone call and message alerts with a blinking green and white light. “EasyBulb Plus is the perfect device for small businesses owners, like DJs, photographers, and restaurant and store owners,” said Ofodieze.

Energy efficient and cost-effective with a 9 watt LED bulb and a lifespan of 50,000 hours (approximately 25 years of average use), the EasyBulb Plus is also compatible in every country. It is easily installed by simply replacing an existing bulb, downloading the app on any smart device, and connecting the EasyBulb Plus Wi-Fi box. Low heat technology ensures EasyBulb will not burn skin, and lights can still be operated by a physical light switch as well.

There are two types of EasyBulb Plus. The first is the RGBW, which has the option of the full spectrum of color, including pure white. The second is the EasyBulb Plus White Light Only, which produces only white light but can be altered from warm to cool white according to preference. Access to lighting – either one bulb at a time or groups of lights – is completely secure with EasyBulb Plus’ built-in WPA2 encryption, so no unauthorized users can control the lights.

About Gigateq Limited:
Based in Manchester, England, Gigateq Limited is a company devoted to home automation, having created its first smart device-controlled LED light in 2012. After further development, especially with the controlling app, the company’s EasyBulb Plus allows people to use their mobile device to save time and money. To learn more about the EasyBulb Plus, visit easybulb.com/en. To contribute to the crowdfunding campaign, visit igg.me/at/easybulbplus/x.