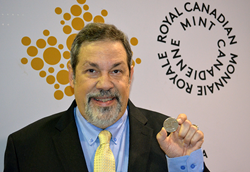 Michael Fuljenz holds one of the new Bald Eagle silver bullion coins at the Royal Canadian Mint booth during the 2014 World's Fair of Money.

This is the second in a popular series of Royal Canadian Mint silver bullion coins with the theme, 'Birds of Prey.' After seeing them in person, I'm recommending the Bald Eagle coins for both first-time buyers of precious metals and long-term investors.

A new silver bullion coin by the Royal Canadian Mint that depicts a bald eagle in flight while clutching a fish in its talons is being praised by an award-winning rare coin and precious metals expert.

"This beautiful design captures the magnificence of a Bald Eagle, and the coin itself provides collectors and investors a convenient way to own one-ounce of 99.99 percent pure silver," said Michael Fuljenz, President of Universal Coin & Bullion (http://www.UniversalCoin.com) in Beaumont, Texas.

The front of the coin has a portrait of Her Majesty Queen Elizabeth II.

Fuljenz examined examples of the new precious metal coin when they made their first appearance in the United States at the American Numismatic Association Chicago World's Fair of Money in Rosemont, Illinois, August 5 - 9, 2014.

"This is the second in a popular series of Royal Canadian Mint silver bullion coins with the theme, 'Birds of Prey.' After seeing them in person, I'm recommending the Bald Eagle coins for both first-time buyers of precious metals and long-term investors as well as anyone interested in the glorious natural beauty of eagles," said Fuljenz.

"The Royal Canadian Mint is committed to remaining a leader in the precious metal market by offering investors a continually evolving suite of bullion products crafted with exceptional attention to quality and purity," said Marc Brûlé, Interim President and CEO of the Royal Canadian Mint in his own official statement of August 5.

Fuljenz served as an expert consultant to the Royal Canadian Mint on the 2013 Pronghorn Antelope design that was part of an earlier series of bullion coins commemorating North American wildlife.

Known as America's Gold Expert®, Mike Fuljenz has won more than 50 prestigious national and regional awards the past two decades for his consumer education and protection work in rare coins and precious metals, including "The Clemy," the highest honor bestowed by the influential Numismatic Literary Guild. He is a respected community leader in his hometown of Beaumont. Mike Fuljenz also has served with distinction as a consultant to the Federal Trade Commission and, and is on the Boards of Directors of the Industry Council For Tangible Assets, Numismatic Literary Guild and Beaumont Crime Stoppers.