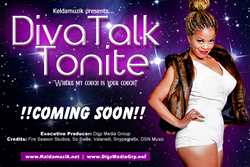 Recording artist and TV personality Keldamuzik has launched her latest project, “Diva Talk Tonite”, which is a talk show hosted by Kelda herself. The program involves a different panel of guests that hold discussions on current events which will be based on entertainment, pop culture, social issues, fashion and more. The first pilot episode has already included a vibrant panel of guests including Marisa Garcia of Chunky Girl Comics, Liliana Herrera who is an aspiring model/artist and last but not least Danyel Monique Davis of N’Spyre Entertainment.

Diva Talk Tonite also kicked off with special personal guests who were interviewed by Kelda one on one, which also included Italina Kirknis of Italina Image & Branding, writer, singer and model Serena Toxicat, as well as powerful and inspiring author Andrea “Michelle” Mills. The show also delivers hilarious, random and outlandish skits from Kelda, with the influence of Saturday Night Live and other comedy shows.

Starting from hosting reality TV series, Diva TV in the Bay Area, Keldamuzik was known as the go to outlet to get interviewed in regards to your latest product or brand. Now with Diva Talk Tonite, Kelda has taken it one step further, which is incorporating all of her talents and showcasing it on a series, which will be distributed worldwide through several TV/Online outlets. Fire Season Studios is behind the production of her series and has assisted with developing ideas to enhance the show’s dialogue. The glamorous clothing that Kelda wears is also sponsored by Ahmyna Xrussell, CEO of “So Swee” and S.O.S Apparel Designs. Digz Media Group is the executive producer of the program and will keep you updated on which networks will be syndicating this series. We want to thank everyone for their time and hope that you will continue to stay with us on this journey.