New research by PsychTests.com indicates that people who are too nice find it more difficult to be assertive, which can result in resentment and a buildup of frustration. 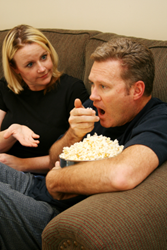 Being too nice and not asserting your needs may be noble but it’s detrimental to your sense of self.

When you consistently go out of your way to be nice to others, putting aside your own needs, you do yourself and others more harm than good.

After school specials always preached the importance of being nice. Even lovable Mr. Rogers entreated viewers to “please,” be his “neighbor.” But what would Mr. Rogers do if the people who lived next door were partying into the wee hours of the morning or left their dog outside, barking endlessly? Chances are that he would be a nice person and accommodate them. There is also a good chance, according to researchers at PsychTests, that his continuously acquiescing nature will exacerbate the issue and, in fact, potentially make him unhappy.

Researchers at PsychTests assessed 6,717 people using their Assertiveness Test, and then divided them into three groups:

According to PsychTests data, of those who are too nice,

And that’s not all that researchers at PsychTests discovered.

“Of those who are too nice, at least 64% were women,” explains Dr. Jerabek, president of PsychTests.

“The women in our sample were also more likely than men to put other people’s needs ahead of their own, and to have a little more difficulty saying ‘no’ to requests made of them. What holds a lot of nice people back from asserting themselves, whether women or men, is the fear of the social repercussions: they don’t want to come off as being mean or cruel. But when you consistently go out of your way to be nice to others, even if it means putting aside your own needs, you do yourself and others more harm than good.”

“When you’re always the one giving to others they will start to expect it,” points out Dr. Jerabek. “They may even become dependent on you to always be there in times of need. Sometimes, you have to put your foot down for their own good. It’s not that we’re condoning selfishness or cruelty; rather, we are emphasizing the importance of standing up for yourself and making sure that your needs are being met as well. You can still be nice while being firm.”

Researchers at PsychTests offer the following tips on how to say “no” to others in a kind yet firm manner:

Want to assess your level of assertiveness? Go to http://testyourself.psychtests.com/testid/3091.

Always giving in to other people’s desires can result in a buildup of frustration, because our own needs are not being met.Consistently going out of your way to be nice to others at the expense of your own needs does more harm than good.