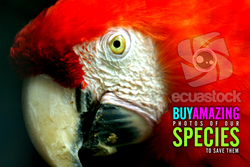 What we need in order to protect these animals is support from local communities and awareness around the globe of what is going on here in Ecuador. We need to raise money to put an end to thoughtless practices that are eliminating entire species.

Ecuador is home to thousands of animal species living in the jungle, mountains, coastal regions, and the Galápagos Islands, but many of these animal species are in danger of extinction. Ecuastock.com is a company hoping to raise awareness of the plight of these animals by selling professional photographs and using the proceeds to fund animal-saving programs. Ecuastock has launched a crowdfunding campaign to raise $150,000 by October 3, to help boost their sales and protect as many animals as possible.

Ecuador’s biodiversity is so extensive that just one portion of the country, the Yasuni National Park, has more native species than the whole of North America. Due to human behavior like petroleum exploitation, indiscriminate forest logging, trafficking of exotic animals, unauthorized fishing, and expansion of civilization, the multiplicity of animal species is in danger. “What we need in order to protect these animals is support from local communities and awareness around the globe of what is going on here in Ecuador,” said Ecuastock Co-Founder Daniel Silva. “We need to raise money to put an end to thoughtless practices that are eliminating entire species.”

Ecuastock’s business plan is simple. Professional photographers working together capture images of thousands of animal species in the wild and make them available for purchase. The proceeds from image sales help to improve resources, infrastructure, and equipment in the Amazon region and create a global awareness campaign through social media. Money from sales also helps document wildlife and share data worldwide as well as help support the acquisition of land for wildlife protection areas.

Some of the larger giving level perks include a two-night visit to Ecuador, a guided tour to meet the native species. Contributors will also have the opportunity to plant a tree in the Amazon, and have a protected area where trees planted are named after them.

About Ecuastock:
Ecuastock is a part of a digital marketing business that has created and developed several brands and projects over the past four years based on social media, digital communication, and online publicity. For more information or to contribute to the crowdfunding campaign, visit igg.me/at/buyamazingspecies/x.