Sports nutrition brand, Cellucor, who is nominated for 12 Bodybuilding.com Supplement Awards, is rewarding fans for their support with its Vote Cellucor campaign. 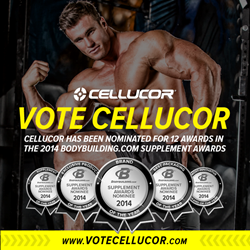 Only 10 days left of the Bodybuilding.com Supplement Awards voting period and elite sports nutrition brand, Cellucor, and maker of last year’s “Pre-Workout of the Year” award winner, C4 Extreme, is rewarding its fans for their support through its Vote Cellucor campaign.

“Through the Vote Cellucor campaign, we wanted to find a way to give back and say ‘thank you’ to the most passionate consumer-base in the industry,” commented, Adam Kossoff, Cellucor's Director of Social Media.

The campaign rewards fans for completing actions that relate to votes for Cellucor. Fans can then redeem those points to enter to win a ton of Cellucor prizes.

"By giving fans a chance to win $1,000s in Cellucor products, we’re able to share the excitement of Awards Season through an innovative platform that rewards fans for their level of support. We’ve been blown away by the response so far, which is a true testament to the power of Cellucor Nation," continued Kossoff.

Official voting is hosted on Bodybuilding.com and will continue until August 24th. Cellucor fans who want a chance to score prizes must visit VoteCellucor.com and follow the instructions outlined on the site.

Cellucor is nominated for the following awards: