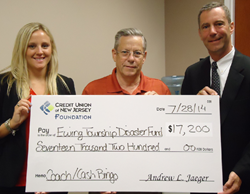 Credit Union of New Jersey Foundation held a Coach®/Cash Prize Bingo Night in support of the Ewing Community Disaster. The Bingo Night was held on June 6, 2014 at 6pm at the West Trenton Firehouse located on 40 W. Upper Ferry Rd in Ewing, NJ. All proceeds from the event went to the families affected by the disaster that happened in Ewing, NJ on Tuesday March 4th.