The online platform for commercial real estate owners and brokers will use the Series A investment to fuel international growth, hire top talent and speed up product development. 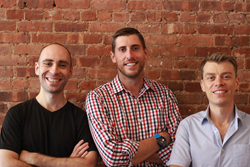 Over the past 12 months, we've seen a remarkable shift in the industry.

"When I was a commercial broker I was always amazed at how few tools there were to help me do my job," says Hightower CEO and cofounder Brandon Weber. "Over the past 12 months, we've seen a remarkable shift in the industry. The most sophisticated owners and brokerage firms have now awakened to the reality that technology and analytics can dramatically improve their businesses. We're excited to power that transformation."

Commercial real estate owners use Hightower to access a 360-degree view of their leasing businesses. The software empowers owners to manage their deal pipelines, existing tenants, and marketing efforts, all in one intuitive program. For brokers, Hightower’s dead-simple smartphone application makes it simple and painless to track prospects and negotiations, access deal files, and market available space.

Hightower customers include over 40 commercial landlords and institutional investors who manage hundreds of millions of square feet on the system. Brokers from the major firms, including CBRE, Jones Lang LaSalle, Cushman Wakefield, Colliers, and Cassidy Turley are also choosing Hightower.

“In the eight months since our seed investment in Hightower, we’ve watched them win over commercial real estate with a platform that gives owners and brokers exactly what they want–simplicity, mobility and visibility,” says Ethan Kurzweil, a partner at Bessemer Venture Partners who helped lead the round. “We initially invested in Hightower because we knew Brandon and his team were top notch and the impressive traction that we’ve seen is a testament to the skill and dedication they have brought to changing the way commercial real estate does business.”

Founded in the spring of 2013, Hightower now employs 17 people in its New York City headquarters. Customers in 36 markets manage over 360 commercial properties on the system and the company is quickly expanding abroad to markets in Canada and Europe.

Thrive Capital
Thrive Capital is a private equity and venture capital firm based out of New York City focused on technology and media investments. Since its founding in 2009, Thrive has raised $250 million, investing in companies including Instagram, Kickstarter and Warby Parker.