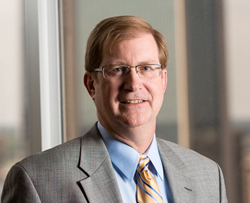 To be recognized in this way is very humbling...I'd like to express my gratitude to the Florida Insurance Council and my colleagues who work so hard to ensure FIC is a leading voice in protecting Floridians.

Florida Family Insurance President Peter Corrigan was awarded the John L. “Rick” Ricciardelli Lifetime Achievement Award by the Florida Insurance Council (FIC) during their recent Summer Symposium. The award is given in honor of the late John L. Ricciardelli, an influential industry voice and one of the founders of FIC.

Corrigan was recognized for his outstanding leadership as chairman of FIC during a period in the association’s history marked by turbulent economic times and an internal reorganization. Serving from the summer of 2011 to the summer of 2013, he is one of only a handful of people in FIC’s 52-year history to serve as chairman for two terms.

“I am deeply honored and overwhelmed by the John L. ‘Rick’ Ricciardelli Award. Mr. Rick was a giant in the Florida insurance industry and this award has previously been presented to professionals who have dedicated their lives to insurance public policy issues,” Corrigan said. “To be recognized in this way is very humbling.”

He was presented the award by Gary Guzzo of Floridian Partners, a legislative consultant for FIC and former Deputy Insurance Commissioner. "Peter epitomizes the qualities which made Mr. Rick so special, including his service to FIC, his willingness to devote the great amount of time which was necessary, and being such a genuine and nice person," Gary said.

The award’s namesake, known as Mr. “Rick,” served as chair of the FIC executive committee and board, as well as holding several other key positions. President of a Miami-based auto insurance company, Mr. Rick worked for decades with the Department of Insurance to fight auto insurance fraud in the Miami area.

Corrigan credits the success of his FIC tenure in part to the diligence of many of the organization’s members. “I would like to express my gratitude to the Florida Insurance Council and my colleagues who work so hard to ensure FIC is a leading voice in protecting Floridians.”

The Florida Insurance Council was established in 1962 to represent the insurance sector in legislative, regulatory, judicial and executive branch forums. The Council is now Florida's largest company trade association, representing 31 insurers groups consisting of 236 companies—which write over $33 billion a year in premium volume and provide all lines of coverage.

Since 1996, Florida Family Insurance has been a financially strong, stable Florida homeowners insurer, providing outstanding customer service to its Agents and Policyholders. With offices in Bonita Springs and Jacksonville, Florida Family services over 115,000 Policyholders throughout Florida, writing homeowners, condominium, rental property, and flood products through a network of licensed independent agents.