Americans spend more than 1 million days in the hospital each year from crash injuries. 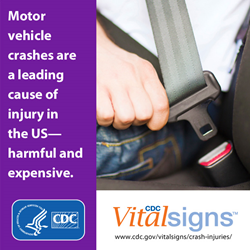 More than 2.5 million people went to the emergency department (ED) – and nearly 200,000 of them were hospitalized – because of motor vehicle crash injuries in 2012, according to the latest Vital Signs report by the Centers for Disease Control and Prevention.

“In 2012, nearly 7,000 people went to the emergency department every day due to car crash injuries,” said CDC Deputy Director, Ileana Arias, PhD. “Motor vehicle crash injuries occur all too frequently and have health and economic costs for individuals, the health care system, and society. We need to do more to keep people safe and reduce crash injuries and medical costs.”

o More than 75 percent of costs occur during the first 18 months following the crash injury.

For this Vital Signs report, CDC analyzed ED visits due to crash injuries in 2012 using the National Electronic Injury Surveillance System-All Injury Program and the Nationwide Inpatient Sample. The number and rate of all crash injury ED visits, treated and released visits, and hospitalized visits were estimated, as were the associated number of hospitalized days and lifetime medical costs.

Vital Signs is a monthly report that appears as part of the CDC journal, Morbidity and Mortality Weekly Report.