Salmon In The Seine is a beautifully-written tribute to Ernest Hemingway and his love for nature and the outdoors. 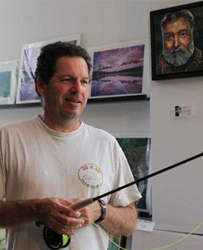 There was another side of Hemingway, besides the image of a macho blood sportsmen and brawler as seen in various movies and biographies.

John Hemingway’s article, Salmon In The Seine, is a beautifully-written tribute to his grandfather Ernest’s love for nature and the outdoors.

“There was another side of Hemingway, besides the image of a macho blood sportsmen and brawler as seen in various movies and biographies,” says Martin Silverstone, Editor of the Atlantic Salmon Journal. “He was genuinely concerned about the natural world and took his role helping biologists in the study of various species very seriously.”

John Hemingway’s article centers around the return of wild Atlantic salmon to the Seine River, following a 25-year clean-up effort of the Seine and its tributaries.

“The Seine River recovery story, although a small part of the article, is significant in that the fish have returned on their own,” says Silverstone. “Unlike bigger restoration efforts on the Rhine and the Thames, the Seine restoration relied solely on sewage plants and other river improvements. The improved water quality was enough to bring back salmon. This is good news to the thousands of volunteers that work to restore water quality to rivers in any area where Atlantic salmon once swam.”

In Salmon In The Seine, Hemingway describes his grandfather as a “convinced naturalist and conservationist.”

“Indirectly the story shows that, although the times have changed, conservation is not a new or recent principle and if Hemingway was alive today, I am certain he would support live release of Atlantic salmon,” says Silverstone. “Perhaps not in the image that we have of him where he might punch someone in the nose who killed an Atlantic salmon, but certainly as a great artist who might have given us another rendition of The Old Man and the Sea where the giant marlin is released out of respect and concern.”

As for the younger Hemingway’s talent as a writer, Silverstone says “the writing gene seems to be genetic to some extent. He wrote a beautiful story that connects himself, his Uncle Jack and grandfather Ernest with fly fishing, the futility of war, conservation and ultimately the return of Atlantic salmon to the Seine River. Now that is a talented writer!”

And what would Ernest Hemingway have to say about Salmon In The Seine?

“I am pretty sure that he would be pleased,” says John Hemingway. “First of all, because I mention his short story The Big Two-hearted River, and also because I write about his novel A Farewell to Arms. It is written well and he would expect that of a grandson, or at least hope for that. I think that he would also like it that I am interested in fishing and fly-fishing in particular.”