NEBI.MOBI is ready to provide a high-end smartphone and service that does not rely on cellular service providers or contracts. 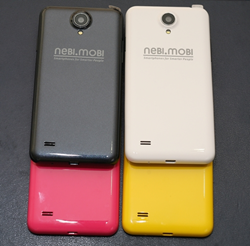 NEBI.MOBI works by using open Wi-Fi networks and its own hotspots to support data. This same access can provide users with calling and text features.

Cellular providers would like us to believe that we have no alternatives to their incredibly expensive data, text, and calling plans. They all provide the same services at the same excessive fees. But NEBI.MOBI is about to change the entire playing field.

Cellular telephone use is on the rise, as are plan prices. Despite the recent development of non-contract plans, the cost to consumers continues to be on the rise. Those who use the devices as their primary means of talk, text, and online access on-the-go are especially dependent upon the cellular provider networks for service. There is a new option being proposed that could challenge that dependence and significantly lower the cost, without lowering the service quality, for consumers.

NEBI.MOBI is proposing a new way to use your mobile smartphone that is completely different and independent from cell towers and cellular service providers. They have launched an Indiegogo crowdfunding campaign to raise funds for their “Smartphones for Smarter People” phones and services. The $50,000 goal will be open until September 21, 2014. Special perks are offered for contributions of all sizes.

NEBI.MOBI works by using open Wi-Fi networks and its own hotspots to support data. This same access can provide users with calling and text features. Voice over Internet Protocol, or VolP, technology is available and capable of being used for all of the traditional cell phone features, without the cell phone provider hassles. Setting NEBI.MOBI apart from other app-based solutions, users have the ability to transfer and keep their current cell phone numbers, drop carrier plans, or simply subscribe to cheaper, data-only, 3G network packages to widen the coverage area beyond W-Fi hotspots. This still affords users the option of avoiding expensive smartphone plans.

The smartphone associated with the technology is prepared for manufacturing. The EVE 008 is optimized for VolP access over Wi-Fi and cellular networks. It is comparable to high-end touchscreen phones being offered for several hundred dollars at retailers. In fact, it has features that are improvements over many of the current stream of cell phones that require a two-year contract or monthly payment system to make them affordable.

Raised funds will allow the company to move to economic activity volume. This will, in turn, decrease the cost of the platform and device selections for consumers. Funds will also be used for upfront payment for high-end telecom servers to secure bandwidth for users. A successful campaign will make NEBI.MOBI’s free public Wi-Fi coverage areas increase as well.

The smartphone and cellular service market is about to undergo a shocking change. Will you be one of the founding members?

About NEBI.MOBI
Nebi Cem Erdogan has studied at Columbia University and MIT as his passion for inventing, startups, and strategy and innovation management. He has worked for Fortune 500 companies and is ready to push the boundaries of the mobile service market. He and his wife, Eve, are ready to accept the challenges associated with providing their innovative product.