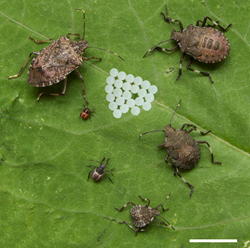 Investigators at the Institute for Genome Sciences at the University of Maryland School of Medicine and the University of Maryland Department of Entomology have used a new strategy to quickly sequence genes activated throughout the life cycle of the invasive brown marmorated stink bug. Their findings, which could lead to new ways to control this abundant and costly pest, were published online August 29 in the journal BMC Genomics.

The brown marmorated sink bug, Halyomorpha halys, is an invasive pest of the mid-Atlantic region of the United States, which has caused millions of dollars of damage to a wide range of crops. It is a pervasive nuisance to homeowners, invading home gardens and congregating in homes to overwinter. There are few treatments to deter the damage it causes or its ability to spread. Growers consider the invasive stink bug to be the single most important pest in the mid-Atlantic region, and they have tried desperate measures, including the increasing use of broad-spectrum pesticides to control the problem. This has been a particularly difficult invasive pest to manage, yet until now there has been little genetic information to aid researchers seeking more effective ways to control it.

With funding from the United States Department of Agriculture’s National Institute of Food and Agriculture (USDA-NIFA) Specialty Crop Research Initiative (SCRI), the Maryland scientists developed a way to skip the time-consuming first step of breeding genetically identical individual animals in the laboratory, which is normally a first step in analysis of new genomes. Instead, the researchers were able to sequence and analyze all of the genetic variants that arose in their population of stink bugs, and to do so at all points in the insects’ life cycles, from the egg stage through late adulthood.

With this new information in hand, researchers can develop new insights into the original stink bug invasion in Allentown, Pennsylvania and subsequent invasions throughout the U.S. The data can also aid in the development of novel pest management agents.

“Rather than spending months or even years inbreeding insects in the laboratory in order to simplify the genetic analysis, this study demonstrates a new approach that analyzes a genetically diverse population of insects,” says Prof. Leslie Pick, chair of the UMD Entomology Department, who guided the research. “This is the first step in our ongoing work to develop a pest control strategy that employs molecular genetic techniques to manage the stink bug invasion without affecting other, potentially beneficial insects.”

“We are excited to identify highly abundant bacterial genes with properties suggesting that they are functional parts of the stink bug genome,” says Julie Dunning Hotopp, Ph.D., Associate Professor of Microbiology and Immunology at the Institute for Genome Sciences (IGS) at the University of Maryland School of Medicine and senior author on the paper. “These genes may be novel targets in identifying a biocontrol mechanism.”

“The integration of genomic based analysis for invasive pest management may provide rapid responses, similar to approaches in disease epidemiology,” says Claire M. Fraser, Ph.D., director of the Institute for Genome Sciences at the University of Maryland School of Medicine. “This analysis increases our understanding of controlling not only the invasive stink bug, but also adds to our understanding of preventing the introduction of invasive pests in the future.”

The project was supported by a grant from the United States Department of Agriculture-National Institute of Food and Agriculture (USDA-NIFA) Specialty Crop Research Initiative (SCRI) #2011-51181-30937. The content of this article does not necessarily reflect the views of the NIH.

About the Institute for Genome Sciences
The Institute for Genome Sciences (IGS) is an international research center within the University of Maryland School of Medicine. Comprised of an interdisciplinary, multidepartment team of investigators, the Institute uses the powerful tools of genomics and bioinformatics to understand genome function in health and disease, to study molecular and cellular networks in a variety of model systems, and to generate data and bioinformatics resources of value to the international scientific community. http://www.igs.umaryland.edu