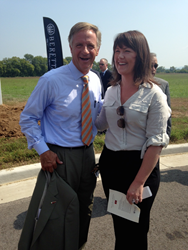 'We're all excited for the opportunity to be part of this new build,' says U.S. Pest President Erica Brister.

Welcome! Top officials from Beretta as well as hundreds of state officials, including Governor Haslam and Senator Lamar Alexander, celebrated the groundbreaking ceremony for the Italian firearms manufacturing facility.

“It’s exciting to welcome Beretta USA to the Middle Tennessee community,” says U.S. Pest President Erica Brister. “They could have chosen from 80 locations in 7 different states, so it reflects positively on Tennessee for Beretta to move all of its manufacturing to Gallatin.”

Construction is scheduled to begin in September. The Gallatin plant, which is priced at $45 million, is expected to attract upwards of 300 jobs to the Middle Tennessee area. The building will include firing ranges, 12,500 square feet of office space, and 130,000 square feet of manufacturing space.

Top Beretta officials, state dignitaries, and other notable figures converged at the invitation-only ground breaking ceremony. “There were big welcomes all around. We’re all excited for the opportunity to be part of this new build,” says Brister of U.S. Pest, which is known for its refined process of pretreating soil prior to slab being poured.

Beretta, which has been in business for 500 years, is a 15th generation family run organization. The build is expected to be a “turning point” for Gallatin, as expressed by state and local officials. Georgia-based and family operated Patillo won the bid to complete construction.

About US Pest
U.S. Pest is Tennessee’s premiere Pest and Termite Control Company. Since 1985, U.S. Pest has served 30,000 homes in the greater Middle Tennessee area.