MichaelHusted.com Features an Interview with Matt Nelson of Matt Nelson Kicking Academy on His Role as a Kicking Coach and on Becoming a National Camp Series Associate

Michael Husted.com is featuring an interview with kicking coach Matt Nelson of Matt Nelson Kicking Academy on his role as a kicking coach, his kicking business, and on becoming a National Camp Series (NCS) Associate according to retired NFL kicker Michael Husted author of HustedKicking.com. 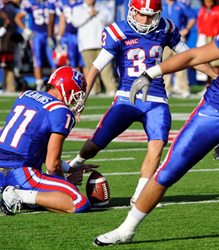 'The NCS ranks guys based on statistics and consistency. It is the “Money Ball” for specialists looking to advance their kicking career to the next level.'- Kicking Coach Matt Nelson.

Kicking blog MichaelHusted.com is featuring an interview with kicking coach Matt Nelson of Matt Nelson Kicking Academy on his role as a kicking coach, his kicking business, and on being a National Camp Series (NCS) Associate according to retired NFL kicker Michael Husted author of HustedKicking.com.

"Matt Nelson is another high quality to our NCS fraternity,” says Husted. “He brings so many attributes to coaching. He is an outstanding pro prospect kicker, kicking coach, business person with a humble personality. No matter what happens with his pursuit of kicking in the NFL, he will be successful on and off of the field.”

Husted has been acquainted with Nelson for some time.

“I've known Matt from his days in high school when he was the first kicker to take advantage of my online start up iPlayers.net,” says Husted. “Since then he has attended my Husted Kicking Pro Camp where he is one of the top ranked free agent prospects. Having him in the NCS family will provide young, aspiring, specialists in the South a great opportunity to learn and succeed.”

For the full interview go to MichaelHusted.com.

In addition to helping young kickers achieve their goals through his kicking academy and NCS, Nelson is also currently training as a free agent for the NFL.

So far Nelson has worked out for the New England Patriots in Foxborough, and on his Pro Day in Ruston with the New Orleans Saints and the San Francisco 49ers. Most recently Nelson was invited to work out at the Cleveland Browns Mini Camp in May. In between professional workouts, Nelson continues to work with retired NFL kicker Michael Husted to refine his technique.

In his interview at MichaelHusted.com, Nelson talks about the goal of Matt Nelson Kicking Academy.

“The mission of Matt Nelson Kicking Academy is to develop high school athletes into NCAA ‘blue chip’ specialists by providing superior, individual-focused, year-round training, coaching, analysis, designed to optimize distance, hang time, and accuracy through lessons and camps in Louisiana, Arkansas, and Mississippi,” says Nelson. “I believe the kicking game is an ongoing evolution, but the fundamentals remain the same. Kicking is both physical and mental and being prepared for different circumstances is essential. Confidence in who you are and what you do is crucial to your success.”

Nelson says he is looking forward to being part of the NCS national team of coaches because the NCS ranking system (KIX) is ‘the only ranking system that makes any sense.”

“The National Camp Series is the only ranking system that makes any sense,” says Nelson. “The NCS ranks guys based on statistics and consistency. It is the “Money Ball” for specialists looking to advance their kicking career to the next level. This falls right in line with the Mission of MNKA. It is extremely valuable for young specialists to gain exposure and see how they stack up compared to the rest of the country, and NCS has created the best platform for specialists.”

Husted developed the National Camp Series (NCS) –and the KIX ranking system- after spending 9 years in the NFL. He says he is looking forward to working with Nelson not just as a “coach” but as a “peer.”

“NCS Associates are some of the best kicking coaches in the country,” says Husted. “NCS coaches provide the highest quality instruction to high school kicking specialists around the country and Matt Nelson is another high quality addition to our NCS fraternity."

ABOUT THE NATIONAL CAMP SERIES (NCS):

The National Camp Series (NCS) is a nationwide network of expert kicking coaches with NFL and College level playing experience. The goal of NCS is to provide effective instruction on the field and guidance off of the field that will allow student-athletes the ability to leverage their sport to get a college education.

The National Camp Series was developed by former NFL Kicker Michael Husted. After a successful NFL career, Michael determined that there needed to be a more cohesive, analytical, and effective process to coach, evaluate, and guide student-athletes looking to play at the next level.