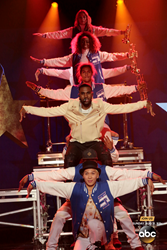 “I was honored to be a part of the telethon again this year because I got the chance to introduce Jason to a cause I truly believe in. MDA does so much for children and adults affected by life-threatening muscle diseases," said Sparks.

Pop star sweethearts Jordin Sparks and Jason Derulo will “show their strength” for families affected by muscle disease on the 2014 MDA Show of Strength Telethon, airing tonight at 9|8c on ABC stations nationwide.

Sparks, who also performed on the MDA telethon in 2011, will introduce Derulo’s performance and televised debut of his new hit single “Trumpets” that has already earned gold status on MDA’s national two-hour broadcast show.

The longtime couple also took their support backstage at the telethon taping at the Hollywood Palladium to meet with families served by the Muscular Dystrophy Association to learn more about the organization’s mission to save and improve lives of children and adults affected by muscle disease.

“I was honored to be a part of the telethon again this year because I got the chance to introduce Jason to a cause I truly believe in. MDA does so much for children and adults affected by life-threatening muscle diseases," said Sparks. "Jason and I have been through a lot of wonderful experiences together, but I think being part of the 2014 telethon as a couple was especially meaningful because we got to meet some amazing families and help continue the progress in the fight against muscle disease.”

Derulo and Sparks also did an exclusive interview with 15-year-old “blue carpet” correspondent and MDA Ambassador Morgan Fritz. Morgan is affected by spinal muscular atrophy (SMA), a genetic disease affecting the part of the nervous system that controls voluntary muscle movement.
(Click here to see their exclusive interview and learn why Sparks and Derulo support MDA.)

About MDA Show of Strength Telethon
MDA’s first Labor Day weekend telethon was broadcast in 1966 on a single New York station and has become the most successful fundraising event in the history of television. The show, originally hosted by iconic star Jerry Lewis and with help from a legion of top celebrities and entertainers, has raised millions each year to provide life-enhancing support and services for the families MDA serves. The real stars on the broadcast have always been the MDA families who have graciously agreed to open their homes and hearts to America and tell their stories of strength. This year marks the 49th annual MDA telethon.

In addition to funds contributed by the public, substantial support also comes from MDA’s family of national sponsors, whose work throughout the year on behalf of MDA will be recognized on the telethon. Among the sponsors: International Association of Fire Fighters, CITGO Petroleum Corp., Lowe’s, Harley-Davidson Motor Co., Jiffy Lube International, National Association of Letter Carriers, The Safeway Foundation, 7-Eleven, Dr Pepper Snapple Group/7UP, Acosta and Burger King.

Funds raised by MDA telethons also have contributed to the organization’s worldwide research program. Today, through current clinical trials, there is growing excitement that new lifesaving treatments and discoveries are on the horizon for many of the disorders MDA is dedicated to defeating, including Duchenne muscular dystrophy (DMD), spinal muscular atrophy (SMA) and amyotrophic lateral sclerosis (ALS).

Visit mda.org/showofstrength to learn more about the 2014 MDA telethon.

About MDA
The Muscular Dystrophy Association is the world’s leading nonprofit health agency dedicated to saving and improving the lives of people with muscle disease, including muscular dystrophy, amyotrophic lateral sclerosis (ALS) and other neuromuscular diseases. It does so by funding worldwide research to find treatments and cures; by providing comprehensive health care services and support to MDA families nationwide; and by rallying communities to fight back through advocacy, fundraising and local engagement.

Visit mda.org and follow us at facebook.com/MDAnational and @MDAnews. Learn more about MDA's mission by watching this video.

Pop star sweethearts Jordin Sparks and Jason Derulo “show their strength” for families affected by muscle disease on the blue carpet at the 2014 MDA Show of Strength Telethon.