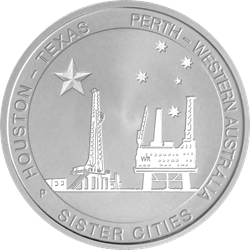 Texas Precious Metals has become a valuable partner of The Perth Mint and champion of our products.

Texas Precious Metals is excited to announce the release of an exclusive Houston-Perth “Sister Cities” coin in partnership with The Perth Mint, Australia. The half-ounce, 99.9% pure silver coin features offshore and onshore oil rigs showcasing the cities’ historic energy sectors. The coin also pays homage to the flags of Texas and Australia.

The Sister Cities coin will have a legal tender face value of AUD$0.50 and be restricted to a limited mintage of only 500,000 coins.

“We expect very high demand for the Sister Cities coin due to its limited mintage and remarkable quality,” stated Jason Kaspar, CEO of Texas Precious Metals. “In the precious metals industry, it is no secret that The Perth Mint produces some of the most beautiful coins in the world.”

Texas Precious Metals is one of the largest retailers of Perth Mint products in the United States, accounting for almost one-third of The Perth Mint’s retail US gold sales in the first half of 2014.

“Texas Precious Metals has become a valuable partner of The Perth Mint and champion of our products,“ said Ron Currie, Perth Mint Sales and Marketing Director. “To come together to create an exclusive product which symbolizes the relationship between our home cities has been an exciting collaboration for us both.”

“There are many unique similarities between Texas and Australia,” noted Kaspar. “And our shared appreciation for precious metals is one of them.”

Houston, Texas and Perth, Western Australia have maintained an international partnership for more than thirty years through the founding of the Houston-Perth Sister City Association in 1984. The ties between Houston and Perth can be traced to the World War II battle of Sunda Strait, where both USS Houston and HMAS Perth attacked a superior force of Japanese ships in an attempt to stall their advance towards Australia. The bond between the two cities was further strengthened during John Glenn’s 1962 spaceflight, when the citizens of Perth turned on lights to allow the astronaut to view the city from orbit. When Houston sought to expand its global ties in the 1980s, Perth was an ideal partner for cultural, historical, and economic reasons.

The Sister Cities coin celebrates the synergies between the two cities’ energy sectors. The coin measures 32mm in diameter with a thickness of 2mm. The coins ship in tubes of 25 and sealed “monster boxes” of 500 coins.

Headquartered in Shiner, TX, Texas Precious Metals is one of the largest precious metals dealers in the United States, featuring a broad offering of gold, silver, and platinum coins and bars from the world’s government mints. The company’s website, texmetals.com, allows clients to place orders around the clock, or by phone during normal business hours. TPM is a member of the Industry Council for Tangible Assets (ICTA) and the American Numismatic Association (ANA). The company is rated A+ with the Better Business Bureau.