Prior to opening Southern California's premier luxury rehab center, Passages Malibu, in 2001, Prentiss was addicted to heroin, cocaine, and alcohol for 10 years. With the help of his father, Passages co-founder Chris Prentiss, he overcame his addiction by looking outside the 12 Step/AA method and turning to a more progressive, modern approach to substance abuse treatment that his father helped create. 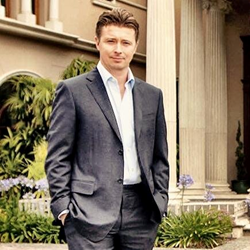 After so many years of wondering why I was doing this to myself and my loved ones, I realized it’s not just about quitting drugs and alcohol; it’s about learning “why” you use and then healing the inner source of your destructive behavior.

Unlike many of today's drug and alcohol rehab centers, CEO and co-founder Pax Prentiss also suffered through the same addiction struggles that brought the thousands of clients to Passages Malibu and Passages Ventura for 13 years.

Prior to opening Southern California's premier luxury rehab center, Passages Malibu, in 2001, Prentiss was addicted to heroin, cocaine, and alcohol for 10 years. With the help of his father, Passages co-founder Chris Prentiss, he overcame his addiction by looking outside the 12 Step/AA method and turning to a more progressive, modern approach to substance abuse treatment that his father helped create.

Through their innovative, holistic approach, Prentiss found lasting sobriety without the typical pitfalls of relapse. His 14 years of sobriety is a testament to the fact that Passages' groundbreaking addiction treatment philosophy and method works. It's not only worked for him, but it has saved, changed, and enhanced the lives of thousands of others in his wake.

"On every anniversary, I'm grateful to my father for having the love, tenacity, and wisdom to find a new way to bring me to sobriety. I did try the 12 Step way and it just didn't work for me. We knew there had to be another path and we found one," says co-founder and CEO Pax Prentiss. For more information on Passages' addiction treatment philosophy and methods, please visit: http://www.passagesmalibu.com/addiction-treatment-philosophy/

Further testament to Passages' success are the industry accolades and achievements the rehab center has received over the years, including being Joint Commission Accredited, ranking as the No. 1 rehab in the world by HealthCare Global, and being named one of the "Most Luxurious Places to Dry Out" by the prestigious Forbes magazine.

"More than the industry taking notice - which does mean a lot - what is truly gratifying is seeing the many faces graduate our program and check in with us over the years to thank us for their continued sobriety. While I am proud and thankful for my 14 years of sobriety, it's even more satisfying to see how many others we have helped," says Prentiss.

Today, both Passages Malibu and Passages Ventura are even more accessible to helping others by accepting many forms of insurance. If you would like to have your insurance run, please call (855) 878-8901.

Founded by Chris Prentiss and Pax Prentiss, Passages Malibu opened in 2001 with its second location, Passages Ventura, opening in 2009. The two drug and alcohol abuse treatment centers offer an alternative to the 12 Step/AA model of addiction treatment by taking a holistic approach with a program that focuses on the underlying issues of substance dependency, rather than suggesting that addiction is an incurable disease. Passages Malibu and Passages Ventura have earned the coveted JCAHO (Joint Commission on the Accreditation of Healthcare Organizations) accreditation, which has only been given to 6% of the nation's behavioral health treatment programs.

The co-founders are also authors of the acclaimed series of treatment books that include their groundbreaking flagship book, "The Alcoholism & Addiction Cure."