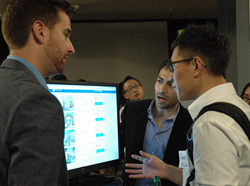 For the first time, Silicon Valley Health 2.0 let the attendees determine the presenters at a special preview demo day event on Tuesday, September 16. Based on the event’s success, the organizers, David Parpart, Director of Marketing at NavisHealth, and Akhsar Kharebov, Chief Evangelist at Validic, are preparing for an even larger demo day event on October 21. The event, held at the Plug and Play Tech Center, was sponsored by NavisHealth, Sprint Accelerator, and Plug and Play.

—Attendees Play Venture Capitalists—
Attendees received three pretend checks totaling $750,000 to invest in their favorite companies, giving them an active role in the event’s outcome. There were two groups of winners: the Investors’ Choice Awards, selected by Ivan Zgomba and Andras Toth from Plug and Play; and the Popular Company Awards, that received the greatest amount of funding from attendees. These winners also had the opportunity to present a pitch deck and have a Q&A with the audience, in addition to prizes provided by Sprint Accelerator.

Two of the winning companies address these problems: MediSafe, a medication management platform, and Statim Health, a search engine for cost and quality of healthcare.

—Keynote—
The keynote speaker was Matthew Holt, founder of The Health Care Blog in 2003, and co-founder of Health 2.0 in 2007. He shared his views on how the health tech industry changed between the birth of his children, noting that while certain technologies, such as electronic health records, have improved health care, there is still a long way to go in making healthcare more convenient, useful, effective, and safer.

“We saw a lot of great companies and were really pleased with the level of engagement at this month’s demo day event,” said Kit Sun, CEO of NavisHealth. “NavisHealth was proud to be a sponsor, and we’re looking forward to supporting more great startups in October.”