Lopez Lomong, US flag-bearer for the 2008 Olymics, will speak to students at Cornerstone University about growin up in a refugee camp yearning to go to school. 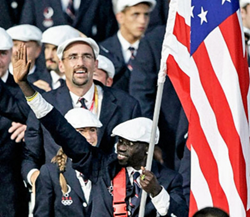 Lopez Lomong proudly carries the US flag during the 2008 Olympic Opening Ceremonies in Beijing.

US Olympic runner, Lopez Lomong, will speak Sept. 8 at Cornerstone University about his recent book “Running for my Life."

The book documents his journey from the time he was taken from his family in the Sudanese Civil War to become a child soldier, through his life as a lost boy at a refugee camp in Kenya, and then his success as a Nike-sponsored athlete on the US Olympic Team.

"My story is not my own - it's the story of thousands of children who are still victims to the evil of war,"
Lomong says on his website. "I dream to empower people to look at their lives in a new light and take action in their communities and in the world. Sharing my story is my passion!"

One year after becoming a naturalized American citizen, Lomong carried the US flag during opening ceremonies at the 2008 Olympics in Beijing.

Lomong will speak on the hardships that he experienced as a young child and inspire students and staff to get involved with providing four major resources: clean water, nutrition, health care and education to the people of South Sudan.

Each year, first year students at CU focus on a cultural issue. This year's focus is on genocide and our call to action as Christians. Lomong's book was part of the summer reading for incoming freshman who will get to meet Lomong and discuss ways to prevent and help those afflicted by genocide.

During the summer, staff and students were asked to participate in a week-long event "Refugee for a Week" where each day they were asked to do one thing a refugue would have to do.

Illiterate for most of his life, Lomong graduated from Northern Arizona University in 2011 and dedicates his time to training for the Olympics and raising funds for his foundation, The Lopez Lomong Foundation.
His goal is to raise $500,000 for clean water, health care, education and nutrition.

"Twenty years ago I ran for my life as I tried to escape the soldiers with guns," said Lomong in his book. "Today, I run for my life as I chase down the incredible opportunity God has laid out in front of me….Now, I run to help others not only survive, but thrive."