The Grounds Guys® among Top 10 Best for Vets Franchises 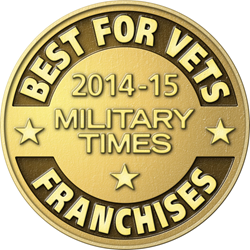 We are forever grateful to those who have so willingly sacrificed for this country.

“As with all of the Best for Vets rankings, Best for Vets: Franchises is an editorially independent news project that evaluates the many factors that make an organization a good fit for military veterans and spouses,” Amanda Miller, editor of Military Times EDGE magazine, said.

The Grounds Guys ranked at number eight on the list. “We are forever grateful to those who have so willingly sacrificed for this country,” Heather McLeod, Director of Franchise sales marketing at The Dwyer Group, said. “It is truly an honor to be able to provide Veterans with opportunities for success through franchising.”

Additionally, The Grounds Guys were selected in June by USA Today and The WorldFranchising network as part of its listing of the 50 Top Franchises for Veterans.

The Grounds Guys are committed to helping veterans achieve their dreams and reach their goals by being in business for themselves. The Veterans Transition Franchise Initiative (VetFran Program) was established by Don Dwyer, Sr., founder of The Dwyer Group, soon after the Gulf War ended in 1991.The Vet Fran program is a voluntary effort of International Franchise Association (IFA) member companies to encourage franchise ownership by offering business franchise opportunities and financial incentives to honorably discharged veterans.

The rankings are published in full in the September issue of Military Times EDGE magazine, the premier publication for military transition, and online at MilitaryTimes.com, as well as ArmyTimes.com, NavyTimes.com, AirForceTimes.com and MarineCorpsTimes.com. The top 10 franchises are compared in the issues of Army Times, Navy Times, Air Force Times and Marine Corps Times on newsstands the week of Sept. 8.

The full rankings can be found online here.