High Tech Pet introduces Bluefang, ground-breaking technology that turns a smartphone to a remote dog trainer, bark collar and more by sending commands, transferring firmware and monitoring sensors on a Bluetooth Dog Collar in real time, from over 400 ft. 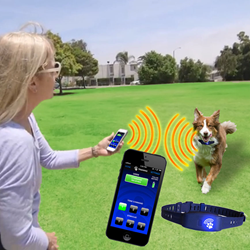 High Tech Pet Products, Inc. a company that has been developing new pet technologies and gadgets for the past 28 years, may have finally hit pay dirt. Today, the company announced release of its new, patent-pending Bluefang wireless technology. According to company president, Nick Bonge, "Bluefang is Bluetooth for pets. It uses a smartphone app to send commands and data to and from a special Bluetooth dog collar. Pet owners can train, contain, and instantly monitor the fitness level of a dog from up to 400 feet away. No other product can do this in real time or over such a long distance." The first products released for sale include the BF-16 collar, a combination remote dog trainer and anti dog barking collar, and the enhanced BF-22 collar that also functions as an invisible electronic dog fence. The smartphone app, available for both iPhone and Android, also collects data from the collar and visually charts how often the dog barks and how often he attempts to escape the electric fence's invisible boundary. Pet owners can see their dog's behavior patterns over time and how well the technology is working. "With 220 million smartphones and nearly 90 million pet owners in the US alone, it's about time we connected the two. Our technology does just that." Bonge said.

The company has applied for a broad range of patents on the new technology which, in addition to its impressive range, has the ability to quickly transfer new firmware from the app to the pet collar, adding new functions and features with each app update. "We've built all kinds of stuff into the collar that will magically come alive with future app updates," Bonge said. For example, the collar contains a six-axis accelerometer that future updates will use to track a dog's physical activity, report how much exercise he is getting, calories burned and overall fitness level. It will even suggest exercise routines to get him into top dog shape quickly without overtraining. "A lot of people don't understand that even though most dogs can run faster than humans, their cooling system is not designed for marathons. It kills me to see so many pet owners dragging their leashed dogs along for miles as they ride their bikes," Bonge said. An app update, scheduled for release in October, monitors the dog's vital signs while exercising and allows pet owners to train alongside their dogs. The real-time app takes the dog's breed, size and weight and plots an exercise routine that tells the pet owner when to speed up, slow down and, most importantly, when to quit. "And this is just the beginning," Bonge said. "Our Bluefang electronic dog collars already have voice transmission, tracking and other technology built-in that will delight and surprise users when they find they can download the next update and get all kinds of new, useful and fun features."

The company plans to integrate its new wireless technology into all its core products, including its popular Power Pet automatic pet door. The collar, itself, will control a wide range of pet operated devices while being under the ultimate control of the pet owner's smartphone. The company's Bluefang products have recently been made available online and will be in world-wide distribution over the next few months. "We just set out to design a great new product but, it sure seems like we're changing the pet world in the process." Bonge stated.

High Tech Pet is one of the nation's oldest, most trusted manufacturers of ingenious and useful products for pets and the people they own. It is a science and engineering driven company employing some of the world's best engineers, scientists, veterinarians, animal behaviorists and trainers. The company has brought many popular pet product innovations to market including the electronic dog fence, anti-bark collar, electronic pet door and remote dog training collar. The company's new Bluefang technology promises to be one of the most significant technical advances in in the pet industry in decades.