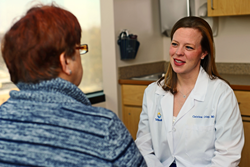 A Cincinnati urogynecologist urges women to educate themselves about their pelvic health and seek treatment for conditions that their grandmothers had to endure.

This new figure is double the 11 percent figure from two previous studies.

Crisp said the new figure is not surprising and illustrates how common SUI and POP are in women. For example, the 20 percent figure is much higher than a woman’s risk for breast cancer (14.8 percent) or lung cancer (6.3 percent).

“Previous studies were smaller in size and limited geographically to women living in the Northwest area of the United States,” said Crisp. “The new Wu study polled a large population of women across the country. Women are beginning to become more aware of their body systems and understand that they don’t have to endure conditions their mothers and grandmothers lived with. Women should now be empowered to stand up and say, ‘yes, I have this problem’ and get treatment.”

Women suffer from a peak of pelvic floor symptoms at the age of 46, then again at age 70, said the study. Crisp said reasons are that at age 46, women are in a transition between childbearing and menopause. At 70 years old, women are post-menopausal.

“We know that certain women are not overly symptomatic,” said Crisp. “But once they go through menopause, they start to develop more symptoms. Estrogen affects collagen, which affects muscle strength and overall support, and the amount of muscle you have atrophies with age. Because of all these things, women develop a weaker pelvic floor.”

Despite how common pelvic floor disorders are, the average American woman waits seven years before she seeks medical treatment for a pelvic health problem. Crisp said she thinks many women are embarrassed to talk openly about pelvic floor issues until they discuss the subject with friends or family and realize other women are going through it, too.

“Women are very strong and tend to take care of everyone else in their families first,” said Crisp. “They keep on going until they are fed up with their symptoms—then seek care. Then they realize what a huge difference proper treatment makes for them.”

Another reason women may delay treatment could be that SUI and POP are not considered life-threatening illnesses, admitted Crisp. “These are not normally issues that may end your life prematurely,” she said, “But they are health issues that can lead to larger issues. And usually insurance covers the majority of costs associated with medical evaluation and office procedures.”

Up to 65 percent of women nationally suffer from some form of incontinence, overactive bladder, or pelvic organ prolapse, with problems increasing after giving birth multiple times or because of the aging process.Cincinnati Urogynecology Associates is trying to improve those statistics through research and education.

Crisp gives lectures on women’s pelvic health to women’s groups and at TriHealth Fitness Pavilion in Blue Ash. She sits on the advisory board for the TriHealth Hatton Institute for Research and Education and was a finalist for Cincinnati’s Forty Under 40 leaders and innovators.