William Hunt of Crossett, Inc., is recognized for coming to the aid of a trapped man 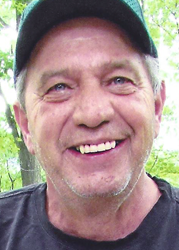 I didn’t know what else to do, so I grabbed a shovel from my truck and dug small trenches in the dirt to keep the asphalt from getting on him and burning him.

It was April 21, 2014, at about 7:45 a.m. Hunt was driving along Route 59 just outside of Warren, Pennsylvania, on his way to pick up a load, when he came across a tanker truck that had left the roadway and struck a large rock and a guard rail. The tractor had flipped onto its side, dragging the tanker trailer along the rail and ripping holes in the top of the tank in the process. Searing asphalt began leaking out after the trailer rolled and landed upside down in a ditch.

As Hunt approached the scene, his first thought was to check on the condition of the tanker driver. When bystanders saw him going closer, they urged him to step back, fearing an explosion, but Hunt saw the placards on the trailer and knew that an explosion was unlikely. He discovered that the truck driver had been pinned in by his crushed roof. Although he could only see the man’s left hand sticking out of the truck, Hunt just knew that he had to have many injuries. As he reached for the hand to obtain a pulse, the man immediately began pleading for help.

“I tried and tried, but I just couldn’t get him out,” said Hunt, recalling what happened that day. “I kept assuring him that help was coming. There were maybe 8,000 gallons of asphalt leaking – it was incredibly hot and all around us. I didn’t know what else to do, so I grabbed a shovel from my truck and dug small trenches in the dirt to keep the asphalt from getting on him and burning him.”

Hunt stayed with the man until emergency personnel arrived and took over. It would take them more than 2.5 hours to cut him free.

Hunt has been a professional truck driver for more than 40 years. When asked about his role in the incident, he said that in situations like these, he tries to stay calm.

“My company has taught us don’t get excited – fall back on your training and do what needs to be done,” he said.

For his good deed, TCA has presented Hunt with a certificate, patch, lapel pin, and truck decal. Crossett, Inc., also received a certificate acknowledging that one of its drivers is a Highway Angel.

Since the program’s inception in August 1997, hundreds of drivers have been recognized as Highway Angels for the unusual kindness, courtesy, and courage they have shown others while on the job.

To nominate a driver or learn more about the program and its honorees, visit the Highway Angel Web page at http://www.truckload.org/Highway-Angel or Facebook page at http://on.fb.me/tcanews. For additional information, contact TCA at (703) 838-1950 or angel(at)truckload(dot)org.