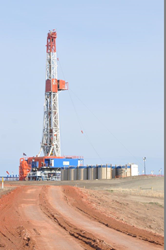 “We are very pleased with the results of the recent Hoffman 2H, 3H, and 10H completions on our McKenzie leasehold, said Richard B. Main, the company Founder/President. Newfield was a pleasure to partner with and extremely efficient in the drilling process. These wells will be great additions to our inventory and we look forward to continued success here in McKenzie.”

McKenzie County is the #1 producing Bakken Shale County in all of North Dakota with over 2300 producing wells and as a result it has been the primary area of interest for FIG.

Ryan P. Wright, the Company CEO said, “The Hoffman wells are exciting for the company and its partners on multiple fronts. In addition to a reduced AFE cost as a result of the multi-well pad drilling, the Hoffman 10H is the first Three Forks well in this Drilling Unit, which proves up the reserves in an additional formation. The Hoffman 10H’s promising performance should help the overall value of the acreage and justify the drilling of additional locations.”

The Hoffman wells are the most recent completions on FIG Tree 2013 Drilling and Acquisition Fund’s 30,000 plus gross acre non-operated leasehold in McKenzie County. The Hoffman wells make the 5th, 6th, and 7th successfully completed and producing wells in the program. FIG and its partners plan on participating in 25-35 wells on the immediate leashold.

About FIG Tree Capital Ventures, LLC
FIG Tree Capital Ventures, LLC is a private oil and gas investment firm based in McKinney Texas with projects in the Williston Basin of North Dakota, The Woodbine Formation of South East Texas, The Cotton Valley/Bossier Haynesville of East Texas and the Edwards Lime Formation of Central Texas. The company and its partners focus on non-operated lease acquisition and development of the most prolific and active resource plays in the Continental United States.