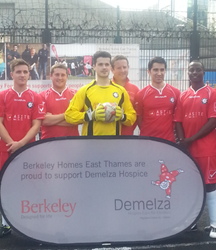 The day saw some great football, some bad football, after many hours of play and some sore legs McGinley were crowned overall winners by beating Houston Cox 3-2 on penalties in the final of the Cup competition.

The Ateam built on last years success by getting into the quarter finals! Well done Lads! #ITsAdoddle

As a supporter and box holder at Fulham Football Club we attend all home games at the Cottage. Are you or your team members Fulham fans get in touch with us! marketing(at)asite.com