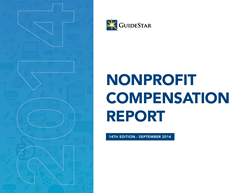 The GuideStar Nonprofit Compensation Report found that for the 14th year in a row, median compensation for female CEOs lagged behind that of respective male CEOs, which tells us that the social sector has a long way to go to meet gender equity.

GuideStar today published its 2014 GuideStar Nonprofit Compensation Report, the only large-scale analysis of its kind based entirely on data reported to the IRS, and the most comprehensive nonprofit compensation study available. The report found that for the 14th year in a row, median compensation for female CEOs lagged behind that of respective male CEOs by up to 23 percent depending on the organization size. It also found that only 17 percent of organizations with budgets larger than $50 million had a female CEO, compared to smaller organizations with less than a million dollar budget, the majority of which have women CEOs.

In addition to the gender gap, the new 2014 GuideStar Nonprofit Compensation Report found that economic uncertainty continued to affect compensation increases in 2012, although salaries for CEOs retaining their positions had the highest percentage increase since 2008. In 2012, median increases in incumbent CEO compensation were 2.2 percent, up from 2.0 percent in 2011 but still well below pre-recession numbers. In 2008, increases were generally 4 percent or higher.

“In 2012 there was a greater median increase in nonprofit CEO compensation compared to 2011, which is possibly a sign that the economic conditions started to improve for nonprofits,” said Chuck McLean, vice president of research for GuideStar, the leading source of nonprofit information, and the author of all 14 Nonprofit Compensation Reports. “Still, the median increase is still only about half what it was before 2008. We also continue to see a nonprofit compensation gender gap. Female CEOs made 11 percent less on average at organizations with budgets of $250 thousand or less, and 23 percent less at organizations with budgets between $25 million and $50 million. All of this tells us that the social sector has a long way to go to meet gender equity in executive compensation.”

The 2014 GuideStar Nonprofit Compensation Report analyzes key employee compensation across the entire GuideStar database of digitized IRS Form 990 information for 501(c) organizations. Derived from data reported to the IRS by more than 91,000 organizations from the entire 501(c) universe for fiscal year 2012, the report includes statistical compensation analysis for 14 executive-level job categories by gender, budget size, program area, and geography as well as comparisons of year-over-year compensation increases for incumbent executives. Other highlights from the report include:

About GuideStar
GuideStar, www [dot] guidestar [dot] org, is a 501(c)(3) nonprofit that connects people and organizations with information on the programs, finances, and impact of more than 1.8 million IRS-recognized nonprofits. GuideStar, a CFC Charitable Organization #75786, serves a wide audience inside and outside the nonprofit sector, including individual donors, nonprofit leaders, grantmakers, government officials, academic researchers, and the media.
###