Madrivo recognized consumer demand for foreign language educational resources and launched its first Pimsleur Learning Language campaign in May 2012. Since that initial campaign, Madrivo has reached over 500,000 people with their integrated and calibrated marketing solutions. 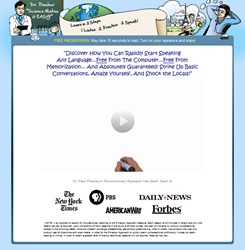 Learning a second language at a young age increases brain development and improves problem solving skills. In addition, bilingual employees make up to 20% more in wages.

Madrivo proudly contributes to the professional and personal development of thousands of Americans who want to learn foreign languages. Due to the collective effects of immigration, assimilation, and globalization, over 47 million Americans, roughly 18 percent of the current population, speak a foreign language. Of those 47 million people, an estimated 28 million consider Spanish their second language. Mandarin, French and German hold the 2nd, 3rd and 4th place spots.

Madrivo recognized consumer demand for foreign language educational resources and launched its first Pimsleur Learning Language campaign in May 2012. Since that initial campaign, Madrivo has reached over 500,000 people with their integrated and calibrated marketing solutions. The Pimsleur Method, a language learning program established in 1963, caters to those who want to learn a new language in an efficient, methodical manner. The company offers over 50 language course programs structured in such a way that users can become proficient in a new dialect by practicing for as little as thirty minutes a day.

Madrivo considers Pimsleur one of the most dynamic and cost-effective products on the market. The Pimsleur company admirably stays true to their mission of distributing a variety of language learning courses across multiple media platforms. They began humanitarian efforts in 2009 which have included, but are not limited to, donating free course programs to Doctors Without Borders, rescue organizations in Haiti and military troops stationed in Afghanistan. Due to the efficacy and accessibility of Pimsleur’s products, Madrivo has successfully leveraged the brand for mass-market appeal.

Madrivo not only backs the Pimsleur business model but also ardently believes that Americans will benefit from using the language learning program. Research suggests that there are physical, psychological and monetary advantages from knowing a foreign language.

Studies have shown that learning a second language at a young age helps to increase brain development and increase the brain activity of a person, making them sharper and better at problem solving. In addition, research shows that bilingualism enhances brainstem responses and overall cognitive functionality. Knowing multiple languages naturally improves a person’s brain health and can slow the rate of aging. People who speak more than their native tongue reportedly have delayed onset of brain-related diseases including dementia and Alzheimer’s.

In terms of financial well-being, bilingual employees make 5-20% more in wages compared to their unilingual colleagues. Multilingual employees offer more value to their employers and therefore receive elevated job responsibilities. Having a work force that can speak multiple languages gives companies the opportunity to expand overseas and negotiate with vendors and clients from other countries. Furthermore, if a business is based in a multicultural area, their bilingual employees can minimize the communication barriers, expanding the target demographic and resulting in an increased sales volume.

Given that there are roughly 6,500 spoken languages in the world today, Madrivo and its partners like Pimsleur have a wealth of opportunities to expand into new markets and further develop the growth and education of American citizens. Madrivo will remain judicious in delivering quality products to targeted consumers, catapulting the value proposition for all parties involved.