Bass virtuoso Stanley Clarke releases his new album UP on Mac Avenue Records September 30, 2014, in a follow up to his 2011 Grammy award-winning Stanley Clarke Band CD. He considers UP to be the most energetic, fun, rhythmic and upbeat album that he has ever done. 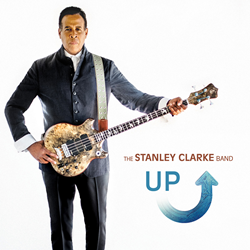 Bass legend Stanley Clarke's new CD, UP, due for release by Mack Avenue Records on September 30, 2014

My aim here was to make a record with my friends. I put myself in really in good hands. I surrounded myself with great musicians, great engineers and recorded the album at great studios.

Bass legend Stanley Clarke’s new recording, The Stanley Clarke Band: UP, is scheduled for release September 30 on the Mack Avenue Records label. This is a follow up to his previous Grammy award-winning Stanley Clarke Band CD as 2011's Best Contemporary Jazz Album. He considers UP to be the most energetic, fun, rhythmic and upbeat album that he has ever done, and with more than forty albums under his belt, that’s saying quite a lot. Clarke’s signature bass virtuosity and amazing technical acumen is present throughout, but the enjoyment he had in making this album is also apparent. Unlike his predominant acoustic bass work on the last few albums, UP is almost equal electric and acoustic bass. Entirely produced by Clarke, he is extremely proud of the quality of digital sound achieved as well as how the album as a whole is thoughtfully paced.

“My aim here was to make a record with my friends. Every single recording session was nothing but fun. The environment I established allowed me to be much less bothered by outside elements,” says Clarke. “Surrounding myself with people I enjoy being with made the sessions effortless. Everyone came prepared and ready to play. All were great musicians and we played together naturally. They came to the studio to give everything they had. I can truly say it was a process that I am grateful to have experienced.”

UP’s connection with his last Grammy-winning Stanley Clarke Band album is the inclusion former bandmates Ruslan Sirota (acoustic piano/keyboards) and Ronald Bruner, Jr. (drums), who toured with him for seven years and were Clarke’s co-Grammy award winners for the 2011 Best Contemporary Jazz Album. Clarke’s current touring Stanley Clarke Band members, Beka Gochiashvili (acoustic piano) and Mike Mitchell (drums), are also represented on the album. Both are quite young, in their teens, and talented way beyond their years.

As a bassist, Clarke has a special affinity for drummers and UP is an album drummers will appreciate. In his opinion the most important musical relationship in a band for a bass player is with the drummer. In UP he brings Stewart Copeland, Gerry Brown, John Robinson, Ronald Bruner, Jr. and Mike Mitchell, some of his favorite drummers.

“I can play very easily with these drummers. We understand each other rhythmically and emotionally. That makes it very fruitful when you’re making music. Drums are a very emotional instrument and the driving force behind a band,” Clarke states.

In addition to the musicians, Clarke enlisted veteran chief engineers, Dennis MacKay (multi-Grammy winner known for working with Return To Forever, David Bowie and Jeff Beck among many) and Gerry “The Gov” Brown (over 47 Platinum and Gold Records and 15 Grammy bids), both whom he has worked with in the past. This only added to the success and comfortable mood of the sessions. Other engineers on various tracks are Yan Perchuk, Jon Hakakian, Alex Venguer, Dave Luke and Danny Johnson.

“I put myself in really in good hands. I surrounded myself with great friends, great engineers and recorded the album at great studios. Almost all of the tracks were recorded at The Village in Los Angeles. I love working in this acclaimed studio. It has an atmosphere of the Seventies I like,” Clarke enthusiastically commented.

The architecture of the album is very deliberate. Tracks 1 through 4 are very upbeat. The first cut is “Pop Virgil.” It is also the first single release off the CD.

“Everyone in my family will say that 'Pop Virgil' reminds them of my grandfather. It has a warm funky and bluesy feel to it, much like him. This actually came out of a drum/bass interlude in my stage performances of ‘School Days.’ I’ve always wanted to turn it into a song of its own. I couldn’t go wrong with the great Michael Jackson session rhythm section of John Robinson, Paul Jackson, Jr. and Greg Phillinganes. Also Jerry Hey did a great horn arrangement,” Clarke says.

Clarke considers “Last Train to Sanity” one of the best pieces he has ever written and it is the only track on the album that deals with the music as a film composition. “It’s a theme to a movie that hasn’t been written yet,” says Clarke. “The song is about an individual who has an epiphany and finds his way back to sanity. I’m so glad that the Harlem String Quartet, who I’ve toured with a bit over the last year, was willing to be part of this recording.”

The title song “UP” is the essence of the album’s sensibilities. “Drummer Stewart Copeland was on my mind with this song. His vibe is one of the most upbeat and positive that I know and that consciousness carries throughout the song. Old friends Joe Walsh and Paul Jackson, Jr., join the fun on this upbeat and lighthearted cut,” comments Clarke.

“Brazilian Love Affair” is one of Clarke’s favorite George Duke compositions. In homage to Duke, Clarke made a conscious decision to include his very good friend’s music in every show and project he does this year. With the foundation of a tremendous arrangement, robust rhythms and a vigorous samba influence predominate the song that expresses Duke’s love of Brazil and its gorgeous beaches, beautiful people, good food and openness of heart. Clarke sings Duke’s parts and is joined by Jessica Vautor on lead vocals. The track also showcases an outstanding piano solo by 17-year-old Beka Gochiashvili.

UP’s mood slows down and smooths out a bit with acoustic “Bass Folk Song #13: Mingus,” a homage to Charles Mingus done on solo acoustic bass. As in previous recordings, Clarke unveils four more bass compositions in UP that he has dubbed Bass Folk Songs. Clarke says, “They’re very specific compositions and each one is different. I started writing them when I was much younger and have about twenty now. They are specifically written for a solo bass.”

Former bandmates Ruslan Sirota and Ronald Bruner, Jr., join Clarke on “I Have Something To Tell You Tonight.” The addition of the luscious sounds of Kamasi Washington on sax creates a dreamy improvisational jam. An interesting aspect of this cut is that it was done in one take with no overdubbing. After playing with these musicians for over seven years, the collaboration was intuitive.

“Trust” is a straight ahead jazz piece. The song is dedicated to Clarke’s daughter NaNa (Natasha) and arose from a family discussion one evening. Though lyrics would seem appropriate to convey the conversation, here Clarke captures the feel and emotion of the exchange through an instrumental.

Ramping up the album’s ambiance again, Clarke and the musicians have fun with "Gotham City." A fan of superheroes in films and comics since childhood, this is Clarke’s homage to the genre. “I just let my Alembic bass go and have a great time with Ruslan, Mike Mitchell, Phil Davis on keys and Doug Webb on tenor sax,” laughs Clarke.

“Bass Folk Song #14: Dance of the Giant Hummingbirds/Eleuthera Island” are two Bass Folk songs put together for solo acoustic bass. They convey the frantic movements of the giant hummingbirds found in Chile with the succulent Caribbean overtones of the serene Eleuthera Island in the Bahamas.

“I knew the idea of re-recording ‘School Days’ was potentially dangerous, but just because a song is good and deemed to be a classic doesn’t mean you can’t record it again,” Clarke states. The legendary Jimmy Herring does the dynamic guitar lead on this version. Joining them is drummer Gerry Brown, who was the original “School Days” drummer in 1975.

“I revisited “School Days” recently on tour. I had been told that over the years it had become a bass anthem and a classic must-learn for nearly every up-and-coming bassist. But, I had no idea of the incredible reception it would get from today’s audiences. They were hungry for it,” adds Clarke. “I can’t wait to take it back on tour later in the year.”

The final song on the album is “La Canción de Sofia” (A Song for Sofia). Written for Clarke’s wife Sofia, who is from Chile, this track is a live performance of an acoustic duet with Chick Corea. It was recorded live at Kitara Hall in Sapporo, Japan, last year.

With over 40 albums, four-time Grammy® Award-winner Stanley Clarke has attained “living legend” status. Born in Philadelphia, Clarke has been a constant force of nature in American music since the early 1970s with the success of the jazz-fusion group Return To Forever. During his 45+ year career, he has collaborated with Quincy Jones, Stan Getz, Art Blakey, Paul McCartney, Jeff Beck, Keith Richards, Aretha Franklin, Stevie Wonder, Chaka Khan, The Police, Herbie Hancock and many more. Doubling on acoustic and electric bass with equal ferocity, Clarke was the first jazz-fusion bassist ever to headline tours, selling out shows worldwide. Known for his intense dexterity and consummate musicality, Clarke is a true pioneer in jazz and jazz-fusion.

Also an accomplished film and TV composer of over 65 projects, Clarke’s credits include Boyz N The Hood, the Tina Turner biopic What’s Love Got To Do With It, Romeo Must Die, The Transporter and most recently the 2013 blockbuster Best Man Holiday.

His creativity has been recognized and rewarded in every way imaginable: gold and platinum records, Grammy® Awards, Emmy® nominations, a BMI Award, and virtually every reader’s and critic’s poll in existence. He was Rolling Stone’s very first Jazzman of the Year and bassist winner of Playboy’s Music Award for 10 straight years. Clarke was honored with Bass Player Magazine’s Lifetime Achievement Award and is a member of Guitar Player Magazine’s “Gallery of Greats.” In 2004 he was featured in Los Angeles Magazine as one of the Top 50 Most Influential People. He was honored with the key to the city of Philadelphia and put his hands in cement as a 1999 inductee into Hollywood’s “Rock Walk” on Sunset Blvd. In 2011 he was honored with the highly prestigious Miles Davis Award at the Montreal Jazz Festival for his entire body of work. Most recently, Clarke won the 2013 Downbeat Magazine’s Reader and Critic Polls for Best Electric Bass Player.

Clarke believes in giving back to help young musicians hone their skills. He and his wife Sofia established The Stanley Clarke Foundation 13 years ago as a charitable organization offering scholarships to talented young musicians each year.
-------------