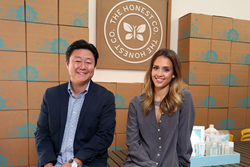 "LA is developing its own unique tech ecosystem as it leverages an established entrepreneur mindset, world-class talent and artistic influencers to produce the next generation of startups," says Vator founder Bambi Francisco.

Vator Splash alumnus Mitch Thrower, a serial entrepreneur, angel investor and 22-time Ironman triathlete will emcee the event. A successful startup founder himself, Thrower participated as a Splash finalist in 2011. The company Mitch founded, Events.com, went on to create jobs and attract millions in funding from notable investors, including Eric Schmidt's Tomorrow Ventures and Wilson Sonsini Ventures. Today the company has grown to 60 employees and is poised for its national launch in October 2014.

"LA is developing its own unique tech ecosystem as it leverages an established entrepreneur mindset, world-class talent and artistic influencers to produce the next generation of startups," said Vator founder and CEO Bambi Francisco. “In this 4th year of Splash LA, we’re thrilled to have some of the brightest minds in the venture funding and tech startup community coming together for a full day of conversation and inspiration."

Hot topics from the Vator Splash 2014 agenda and featured speakers to interview:

– How does Honest Company plan to be LA's hottest IPO in 2015? Listen to Jessica Alba and Brian Lee share their thoughts and interact with these visionary superstars

– Whisper showcases LA as the social media app capital of the world.
Michael Heyward, Founder & CEO of Whisper, and Matt Coffin, early investor.Review how LA rose to this lofty position and see what the future holds.

– Has the app become the new script in LA?
Hear from heads of venture investing from Disney/TechStars, UTA, WME Ventures, Plus Capital.

A limited number of Tickets for Vator Splash are still available.

Whisper Founder Michael HeywardWhisper, one of the startup success stories in LA will attend Splash LA.