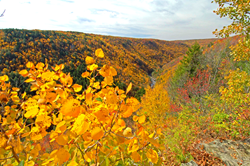 West Virginia Division of Forestry officials will begin providing weekly fall foliage reports Thursday, Sept. 25, 2014. The reports will be available through the agency’s website, http://www.wvforestry.com, its Facebook page, http://www.facebook.com/wvforestry, Twitter account, @wvforestry, and the Department of Commerce’s website, http://www.wvcommerce.org. Reports will be posted each Thursday afternoon through the end of October. Photos and updates, as available through the week, will be posted to the agency’s Facebook page. Fall foliage reports will include percentage of color, recommended driving routes and special points of interest.

West Virginia is the third most forested state in the nation with 12 million acres of forestland. As the weather gets cooler and the days get shorter, leaves stop producing chlorophyll, the chemical that colors them green. Once the production of chlorophyll stops, leaves take on their true colors, ranging from orange and yellow to red, purple and brown.

Leaves on trees at the highest elevations of the state begin to change color first, and, as fall progresses, color works its way down the mountains into the valleys.

The first fall foliage report will be released Thursday, Sept. 25, 2014.