Darkcoin will soon become the first cryptocurrency to offer instant private transactions that could one day rival traditional payment systems like credit cards. 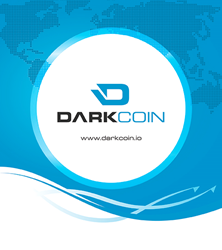 Darkcoin is now the first fully open-source cryptocurrency with financial privacy built directly into the software.

Darkcoin is a revolutionary new cryptocurrency which offers privacy and fast transaction speed. Four years ago, the mysterious and brilliant Satoshi Nakamoto developed a revolutionary piece of software called Bitcoin. In doing so, Satoshi created both a digital currency (so-called "cryptocurrencies" are decentralized and secured by cryptography, rather than by a government) and an inexpensive payment network. Bitcoin uses a decentralized financial ledger called a "blockchain" to keep track of everybody's balances and to transfer money from one bitcoin address to another.

Yet Bitcoin has two shortcomings. First, because it operates on a ledger system, anybody can freely view the account balances and transaction history of other people. Secondly, the Bitcoin network takes up to an hour to transfer money and fully confirm it, which makes it less useful in day-to-day retail environments. Darkcoin has already solved the first problem, lack of privacy, and is rapidly advancing toward a solution to the second.

All of this is accomplished with a key piece of technology called Darksend, which works by mixing up the digital fingerprints of many user's coins all together. Everybody still keeps possession of their own coins through the entire process, but the origin of those coins is obscured from any outside party. Darksend was developed as a closed-source technology while it was being properly tested and audited by third parties. Following last Monday's release of the newest version of Darkcoin, the developers are confident that their application is ready for mainstream use and have open-sourced the Darksend code. Darkcoin is now the first fully open-source cryptocurrency with financial privacy built directly into the software.

Open-sourcing of a financial product such as Darkcoin is essential. It allows users to be certain that their privacy is protected and leads to increased confidence in the quality and performance of the software. It also means that anyone can now go through the code and build upon it, as it has been done over the years with Bitcoin.

Core developer of Darkcoin, Evan Duffield has also announced that Darkcoin's privacy technology has moved out of the beta stages of development and is now ready for mainstream, real-world use.

Future updates to Darkcoin are expected every few months, and will include such things as encrypted multipath communication technology, which is already in the works, this will add another layer of privacy to the system as it will allow users to communicate with the network securely without exposing their IPs and will also hide the identity of the Darksend mixing nodes making it extremely difficult, if not impossible, for third parties to spy on users information. It uses multi-path routing so users can send more than one encrypted message using different routes on the mesh network for redundancy.

But perhaps the most anticipated new feature is the Instant Transaction confirmation system, described in a recent white paper, which will allow Darkcoin to provide a decentralized and more secure alternative to credit cards, with similar transaction speed. The release of Instant Transaction technology will also make Darkcoin the fastest-confirming cryptocurrency in the industry. This will, for example, enable merchants to process transactions in seconds, and it could also remove the risks of people leaving funds on exchanges as they will be able to move coins in and out within minutes.

The Darkcoin client and more information can be obtained at our website: